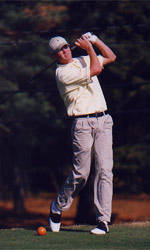 Clemson, SC – Clemson senior D.J. Trahan is one of five college golfers named as finalist candidates for the 2003 Ben Hogan Award. The list was announced Friday by the Golf Coaches Association of America. The honor is presented to the top men’s golfer in the nation, taking into account all college and amateur competitions from May 1, 2002 to May 1, 2003.

The other finalists in addition to Trahan are Ricky Barnes of Arizona, Ryan Moore of UNLV, Hunter Mahan of Oklahoma State and Bill Haas of Wake Forest.

Trahan won the award last year, the first Clemson golfer so honored. This year, Trahan has led Clemson to the number-one ranking in the nation with a 70.55 stroke average and eight top 10 finishes in 10 tournaments. He won the Mercedes Benz Collegiate in Jacksonville in February and has four second-place finishes this year.

In addition to holding down the number-one ranking among college golfers in the Sagarin/Golfweek poll, he is also the number-one ranked amateur in the world according to Golfweek and Titleist. He is also ranked first in the nation among collegiate golfers in final round scoring average (69.1), eagles (10), and par four scoring (3.95). He is also fourth in the nation in greens in regulation (76.6 percent).

For his career, Trahan is Clemson’s leader in stroke average (71.41), rounds in the 60s (42) and rounds under par (75). He needs two rounds at par or better to tie John Engler’s career record in that category. He will next be in action for Clemson May 8-9 at the Atlanta Intercollegiate at Eagles Landing in McDonough, GA.

The winner will be announced on May 9 and the presentation banquet will be held at Colonial Country Club in Fort Worth, TX on May 19. That will be the Monday prior to the Bank of America Colonial PGA Tour event.