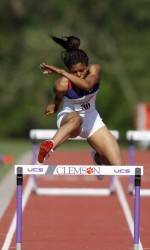 CLEMSON, SC – The Clemson track & field teams return to action this weekend for the 116th annual Penn Relays, held at Historic Franklin Field in Philadelphia. The Tigers are fresh off an ACC Championship on the women’s side, and a fifth-place finish for the Clemson men’s team.

Clemson has had success over the years at the Penn Relays. The Tiger track & field program boasts six relay championships in its history – five by the men’s team and one by the women. The first relay championships were earned in 1992, with the men taking the shuttle hurdle relay crown and the women winning the sprint medley relay. The most successful event for Clemson has been the shuttle hurdle relay, where the men’s team has taken three victories (1992, 1997, 1998).

Clemson will take a good portion of the men’s and women’s teams that competed this past weekend at home at the ACC Outdoor Championships. The women completed the school’s first-ever indoor and outdoor conference championship sweep in the same season.

The action gets underway Thursday at 10:00 AM with two events. Sonni Austin is entered in the women’s 400 hurdles, while All-ACC performers Caroline Kennedy and Amy Morrison will battle for the open pole vault championship. Other individual event competitors Thursday include Bethanie Wachna in the javelin throw (2:00), and Stephanie Buffo and Alyssa Kulik in the steeplechase (8:15). The women will also compete in heats for the 4x100m (1:05) and 4x400m (6:05) relays.

Saturday is a light day of action for the Tigers. Alex Padgett -fourth-place finisher at last week’s ACC Championships – will compete in the men’s hammer throw at 12:15 PM. The women will run the 4x800m relay at 1:55, with the men slated to go in the event at 4:20.