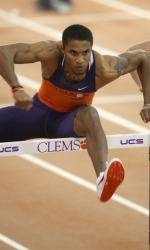 CLEMSON, SC – The Clemson track & field program will play host to its largest home meet of the 2011 indoor season this weekend, as many schools across the Southeast region will make their way to town for the Tiger Paw Invitational on Friday and Saturday. Clemson was scheduled to send a group of athletes to the Tyson Invitational, but that trip has been cancelled due to heavy snow in Arkansas.

The meet will get underway Friday at 2:00 PM at the school’s indoor track facility, located in Jervey Meadows. The first scheduled events at that time are the women’s 1000m run, as well as the open long jump, men’s high jump and open women’s weight throw. Due to the number of entries, invitational sections have been scheduled for the following events: 200m, 400m, pole vault, long jump, triple jump, shot put and weight throws.

Preliminary rounds, semifinals and finals for the men’s and women’s 60m dash and 60m hurdles will be held Friday.

On Saturday, the field events start at 9:30 AM with the open women’s shot put, followed at 10:00 by open sections for the men’s and women’s triple jump. The first track event on Saturday will be the women’s distance medley relay at 11:00.

Clemson enters the meet with a No. 4 national rating in women’s track & field. The Tigers have held steady at No. 4 for three straight weeks. Clemson has one automatic qualifier from the women’s team in Stormy Kendrick (60m) and one from the men’s squad in Miller Moss (heptathlon).

Several other student-athletes are ranked among the nation’s best, according to the Track & Field Results Reporting System (TFRRS). From the men’s team, Spencer Adams is 19th on the performance list for the 60m hurdles. The distance medley relay team that put together a time of 9:54.52 last weekend at Virginia Tech is also ranked among the national top-20 list this week.

On the women’s squad, five athletes are ranked inside the top 20 of a respective event, while the 4x400m relay is as well. Brianna Rollins is fourth on the 60m hurdles list, while Jasmine Edgerson is 15th. Brittney Waller is tied for fifth in the 20-pound weight throw. April Sinkler is 10th on this week’s performance list for the triple jump, while Kendrick is 13th on the 200m list.