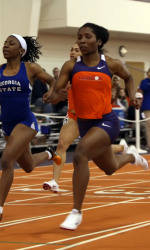 CLEMSON, SC – The men’s and women’s track & field teams will kick off the 2009-10 indoor season on Friday with the Roaring Tiger Opener. Clemson will host 11 schools at the indoor track & field complex, beginning at 5:00 PM.

Both Tiger teams will usher in an exciting group of newcomers, while the majority of Clemson’s veterans will be competing in various events as well. The women’s team, which finished third in 2009 at the ACC Indoor Championships, returns All-American multi-event athlete Liane Weber, as well as two-time ACC champion April Sinkler and eight-time All-ACC performer Patricia Mamona.

Sinkler will not compete in any of her top events, which include both horizontal jumps and vertical jumps. Instead, she is slated for the 60m dash and 300m dash as well. Weber is scheduled for the 500m and the mile relay. Mamona is entered in the 300m and mile relay.

Kristine Scott, Clemson’s top returning female sprinter, is slated for the 300m dash. She was an All-Region performer in the 200m during the 2009 outdoor season, when she qualified for her first-ever NCAA Championships meet. Stormy Kendrick, a freshman sprinter from Gastonia, NC, will compete alongside Scott in the 300m. Brittany Pringley and Brianna Rollins, a pair of high school All-Americans from Miami, will also compete in the sprints Friday.

In the field events, Clemson will introduce thrower Brittney Waller, a freshman out of Greenville, SC. She will compete in both the shot put and weight throw. A trio of females will compete in the pole vault Friday, including senior Caroline Kennedy, a former All-ACC indoor vaulter. In other events, touted freshman Jasmine Brunson of Bermuda will make her debut in the long jump.

The men’s team will take on a different look in 2009-10. The team’s top returning athletes are Justin Murdock and Trenton Guy, All-Americans last season with the 4x100m relay. Murdock will compete in the 300m dash Friday. Guy is not slated to compete. Freshman sprinter Warren Fraser, a native of the Bahamas, will compete in the 300 as well.

Clemson will have multiple entries in the 60m hurdles Friday. The hurdles were an area of improvement through recruiting in the offseason. La’Mont Jackson and Michael Simmerson from Charlotte, as well as multi-event athlete Claudio Delli Carpini.

Jordan Rispress, a multiple All-American sprinter/hurdler in high school, will debut with the Tigers in the 500m dash. Rispress was the national runner-up at the Nike Outdoor Nationals in the 400m hurdles last spring.

In the field events, Alex Padgett returns for his junior season as one of the top throwers in the Atlantic Coast Conference. He was All-ACC in the hammer throw last outdoor season. Padgett is scheduled for the shot put and weight throw Friday, along with red-shirt sophomore Stephen White.

Clemson will have three athletes entered in the men’s long jump, led by Moss. He will be accompanied by junior Josh Fowler out of Inman, SC, and freshman Will Robinson from Chadds Ford, PA.