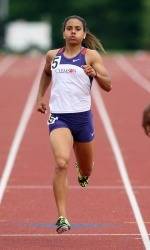 CLEMSON, SC – The top-ranked women’s track & field team and the men’s program will play host to a number of athletes looking to post NCAA first and second round qualifying marks at Rock Norman Track this weekend for the Clemson Tiger Qualifier. It is the last chance for several Clemson student-athletes to earn a trip to Jacksonville, FL for the NCAA East Preliminary Round from May 24-26.

Stormy Kendrick will return to action this weekend after running unattached last week at the Bob Pollock Invitational. The junior out of Gastonia, NC has had an injury-plagued season and has not competed since the prelims of the 100-meter dash at the NCAA Indoor Championships in March. Kendrick is entered in the 100 prelims on Friday at 4:55 PM and in the 200 on Saturday at 3:15. There will be finals for the 100 dash on Saturday as well.

She will be joined by teammate Danielle Curry, Alyssa Kulik, Charlton Rolle and Brannon Sulka are the others.

Also scheduled to be held on the track Friday afternoon include prelims for the men’s and women’s high hurdles, as well as finals for the steeplechase, 1500 meters and 800 meters. Ty McCormack (steeplechase), Natalie Anthony (1500), Kim Ruck (1500), Brianna Blanton (800) and Chris Slate (800) are all scheduled to be in action for the Tigers.

Saturday’s action begins with the men’s javelin at 10 AM, followed by the men’s hammer throw at 11:00. Also in the field, the women’s high jump and men’s triple jump are slated to start at 1 PM. Clemson will send out freshmen C.J. Davidson in the triple jump Saturday.