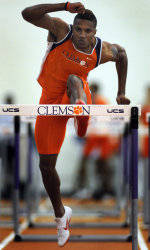 CLEMSON, SC – The women’s track & field team will return to action Saturday at the same facility that saw the Tigers claim the 2010 ACC Indoor Championship. The women, fresh off their first indoor conference title in 18 years, will travel alongside the Clemson men’s tea to Blacksburg, VA for the Virginia Tech Final Qualifier. The meet serves as the last chance for individuals and relays to earn qualification to the upcoming NCAA Indoor Championships.

In capturing Clemson’s second ACC Championship in women’s indoor track & field, the Tigers amassed 145.5 points and defeated second-place Florida State by a final margin of 52.5. It was the largest margin of victory in an ACC women’s indoor meet since the 1997 season.

This weekend, however, the focus will be on qualifying as many athletes for the NCAA Indoor Championships as possible. The meet gets underway Saturday at Rector Field House at 10:00 AM. Clemson will have several competitors – men and women – looking to improve on provisional NCAA marks and times.

The Tigers enter last chance weekend with one automatic NCAA qualifier on the men’s team – Miller Moss (heptathlon) – and five on the women’s roster. April Sinkler has qualified automatically in both the high jump and long jump, Patricia Mamona in the triple jump, Liane Weber in the pentathlon, and Kim Ruck in the 5000 meters.

Clemson has an additional 22 provisional qualifiers, which includes both the men’s and women’s mile relay teams. Several student-athletes need to boost their performances with this weekend’s meet. Spencer Adams ran a personal best 7.84 in the men’s 60 hurdles last weekend, but he is currently tied for 19th on the national performance list for the event. He will compete at 12:15 PM in the prelims, with the finals scheduled for 2:40.

Also in the hurdles, Michaylin Golladay looks to improve on her provisional time of 8.31 in the women’s event. Golladay is tied for 22nd on the descending order list. Teammate Brianna Rollins is likely to earn an at-large bid with her time of 8.17. Rollins, however, hopes to move up in the 200m dash. She is tied for 20th in the nation after winning the event at ACCs last weekend with a time of 23.69.

Also on the track, Justin Murdock can add his name to the latest in a long line of 60m sprint greats from Clemson with an NCAA qualifying performance. He ran a personal best 6.71 and was third at the conference meet last weekend.

In the field events, several provisional qualifiers look to strengthen their case. Zach Berg, an All-ACC performer in the weight throw, is 17th on the latest NCAA performance list in the event with a school-record mark of 66’11.5″. He competes Saturday afternoon.

In the long jump, Josh Fowler of the men’s team and Jasmine Brunson of the women’s team are coming off NCAA provisional performances at the ACC Championships. Both etched their names into the top 10 in the Clemson record books, and both look to improve on their top marks again this weekend. The long jump is set for noon Saturday.