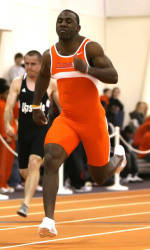 Clemson, SC – The Tiger track & field teams return home this weekend to play host to the Tiger Paw Invitational at the school’s indoor facility. The meet, which will feature over 20 schools from around the Southeast, gets started at 5:00 PM on Friday. The first day of action will be available online on ACC Select, beginning at 6:00 PM. Roy Philpott will call the action through the completion of the final running event on Friday.

The most notable performer for Clemson this weekend will be two-sport star C.J. Spiller, a two-time All-American in the sprints. He will be competing in Friday’s 60m dash, with the prelims scheduled for 6:20 PM. The final will be held at 8:40 PM. Spiller has qualified provisionally for the NCAA Championships, but hopes to improve on his season-best time of 6.71 seconds.

For the first time this indoor season, Clemson will have several athletes participating in both the middle distance and distance events. Jenna Baker, an All-ACC performer last fall in cross country, makes her season debut Saturday at 2:15 PM in the women’s 3000m run. She will be joined by Stephanie Buffo, another sophomore seeing her first action of the season.

Several standouts in the field will be in action this weekend. The women’s long jump, pole vault, and weight throw will be held Friday. Nikola Lomnicka, already #3 on Clemson’s 20-pound weight throw performance list, also competes at 5:00. For the men, Alex Padgett looks to continue his progress in the weight throw (7:00).

Saturday’s field events will include the men’s high jump, triple jump, and pole vault. In the latter event, junior Chris Spear looks to surpass his previous personal best (17’0.75″). He is an NCAA provisional qualifier in the event. The men’s shot put will also take place at 2 PM, once again featuring Rock Hill native Padgett.

Several of Clemson’s NCAA qualifiers will sit out the meet this weekend, including the nation’s leading 60m sprinter Jacoby Ford. From the women’s team, multiple-event qualifiers Patricia Mamona and April Sinkler will also be afforded an opportunity to rest with the ACC Championships coming up in two weeks.