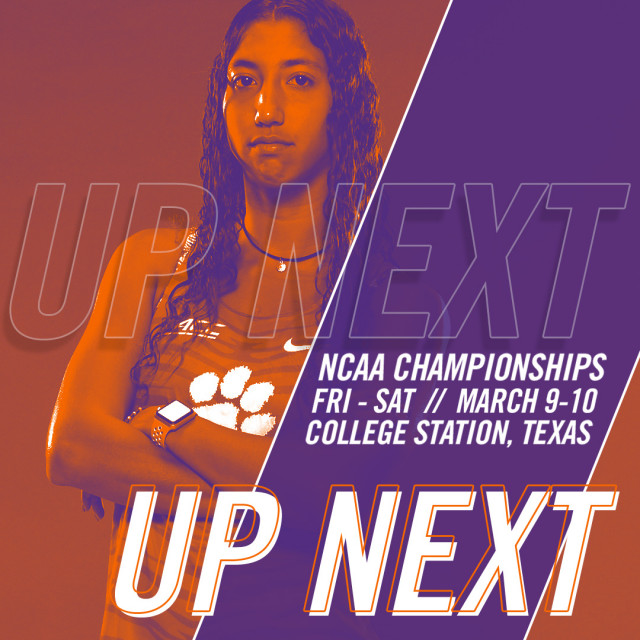 COLLEGE STATION, Texas – Nine men’s and women’s Clemson track & field selections, including the women’s distance medley and 4x400m relay units, are set to compete at the 2018 NCAA Indoor Track & Field Championships, which will commence Friday and Saturday (March 9-10). Texas A&M’s Rhonda and Frosty Gilliam Indoor Track Stadium (4,100) will serve as the host venue for the 53rd NCAA Division I indoor championship meet, and 35th since incorporating the women’s championship.

Grace Barnett kicks off prelim action for the Tigers Friday in the women’s mile, which is slated for 6:50 p.m. (EST). 2018 ACC 400m champion Jeffrey Green is set to compete at 7:25 p.m., after Barnett. Clemson will be well represented in the 800m dash as John Lewis takes to the 200-meter track at 8:15 p.m., followed by Fellan Ferguson and Kamryn McIntosh at 8:25 p.m. Cordell Lamb closes out the individual preliminary events at 8:35 p.m., in the men’s 200m dash. Barnett, Ferguson, McIntosh and Olivia James will chase the the women’s distance medley relay national title at 10 p.m., in Friday’s final event. The foursome currently holds the No. 4 DMR time in the NCAA. On Saturday, ACC triple jump champion Jeremiah Green is slated to take his first jump at 6 p.m.

Both the Tiger men and women are ranked 20th in the nation, according to the latest USTFCCCA pre-championship rankings.

ESPN3 will pick up coverage of the championship meet on Friday at 6:30 p.m., and at 5 p.m., Saturday. Live results can be found on clemsontigers.com.