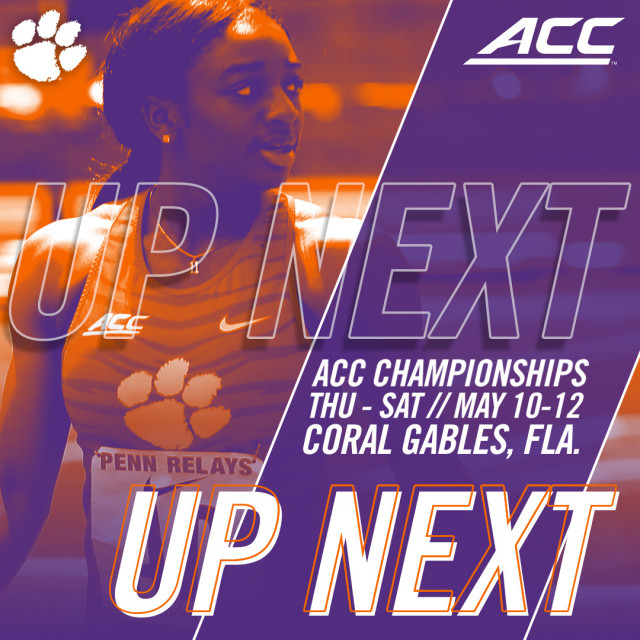 CLEMSON, S.C. – The Clemson track & field team heads to Coral Gables, Florida, for the 65th Atlantic Coast Conference Outdoor Track & Field Championship (36th including women), which will take place at the University of Miami’s Cobb Stadium May 10-12. The Tigers are seeking their 12th ACC outdoor title on the men’s side and eighth on the women’s side. This year’s championship marks the second time the Hurricanes have hosted the annual conference meet with the first coming in 2009.

“Right now, we don’t even have to speak about how important this meet is. It’s a conference championship and we’re always there vying for an ACC title,” said head coach Mark Elliott. “We came up short indoors and our goal is to make sure that doesn’t occur this outdoor championship. We’re as prepared as we can. With our last couple of performances from LSU to Penn Relays, and even this past weekend [at UGA], it seems like we’re hitting our strides and peaking for ACC’s. Our goal at the start of the year was to come out with an ACC championship, and we have an opportunity to achieve that goal this weekend. I think we’re all feeling good and we’re looking forward to it.”

Markeeta Thomas and Lakeisha Warner are set to open championship action on the track in the 400m hurdles Thursday at 6 p.m., while Danielle Borriello and Danielle Little (hammer) and Morgan Allen (pole vault) will get things started in the field –also at 6 p.m. Thursday’s lone final event on the track features Elizabeth Dawson, Erin McLaughlin and Marketa Marcanikova in the 10,000m at 7:55 p.m.

Coverage of the 2018 ACC Track & Field Championships is set to stream on ACC Network Extra on Thursday (6 p.m.), Friday (5:30 p.m.) and Saturday (5 p.m.). Live results can be accessed via flashresults.com.