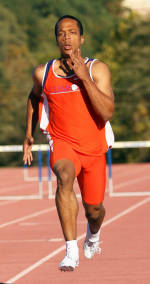 Clemson, SC – Under the direction of first-year Head Coach Lawrence Johnson, the track & field teams will open the 2009 indoor season this weekend by playing host to the Clemson Invitational. The meet will take place Friday and Saturday at the school’s indoor facility, located behind the football practice fields.

Johnson took over the reigns of both the men’s and women’s teams, which were combined into one program, in July. He came to Clemson after most recently a successful stint as Virginia Tech’s associate head coach, where he earned a reputation as one of the nation’s best up-and-coming assistants.

Johnson and his staff have the luxury of several outstanding student-athletes returning this season. On the men’s side, two-sport athlete Jacoby Ford returns as a two-time All-American in the sprints. Ford, fresh off an outstanding football season as a wide receiver, is scheduled to compete this weekend in the 60m dash. The prelims of the event are Friday at 6:20 PM.

Also competing in the 60m dash for the men will be sophomore Trenton Guy and freshman Justin Murdock. Both came to Clemson with impressive credentials in the sprints. Guy was an ACC champion last season with the Tigers’ 4x100m relay, while Murdock was a five-time All-American at the high school and USA Junior level.

Other standouts competing this weekend for the men will be Zach Berg in the weight throw (Friday, 7 PM), George Fields in the long jump (Friday, 5 PM), and Chris Spear in the pole vault (Saturday, 12 PM). All three are former All-ACC athletes in their respective events.

Among those not competing this weekend for the men’s team will be Spencer Adams, a highly decorated prep hurdler who suffered a knee injury in the fall with the football team. His status for track is uncertain at this time. Corey Brown, a fifth-year senior and two-time ACC champion in the relays, will be eligible only during outdoor season due to competing indoors as a freshman in 2004-05.

For the women’s team, Patricia Mamona returns in the jumps. She also plans to hurdle this season, and will compete Friday in the 60m hurdles. The prelims for that event are scheduled for 5:00 PM. The long jump will be Friday as well, scheduled for 7:00 PM. She is a six-time All-ACC honoree in the horizontal jumps.

Nikola Lomnicka will make her much-anticipated debut Friday in the 20-pound weight throw at 5 PM. A native of Slovakia, she hopes to translate her success as a junior national champion in the hammer throw to the indoor setting.

April Sinkler was one of the top newcomers in the ACC last season and has lofty expectations heading into her sophomore year. She was a USA Junior All-American in both the long jump and high jump in the summer of 2008. Sinkler will compete in both events this weekend, the long jump Friday (7 PM) and the high jump on Saturday (2 PM).

Liane Weber is slated for significant action this weekend for the women’s team. The ACC’s pentathlon champion and league Freshman-of-the-Year in 2007, Weber is hoping for a return to form during her junior season. She will compete in the 60m hurdles, 4x400m relay, long jump, and high jump.