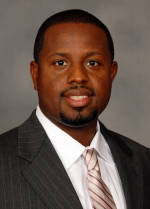 Clemson, SC – The men’s and women’s track & field schedule was announced Monday by Lawrence Johnson, Director of Track & Field at Clemson. The indoor season gets underway on January 9-10 at home with the Clemson Invitational. The Tiger track & field program will host three indoor meets and one outdoor meet during the 2009 season.

“We’ve got a schedule that will afford our kids some meets in which they can learn and foster their development,” Johnson said. “We have some meets that will be challenging and make them have to step up a little bit. We made sure we have a good balance between being able to get some work done, yet also some meets that will challenge the kids.”

Clemson’s teams will not have a December start date for the first time since the school’s indoor facility opened in 2003. The Clemson Opener will not be held this season, as the men’s and women’s student-athletes get adjusted to Johnson and the changes with the coaching staff.

Following the first meet, the teams will head to Virginia Tech and Kentucky on the weekend of January 16-17. The final January meet will be the Penn State National Open in College Park, PA. Clemson will hold home meets in consecutive weeks during indoor season, beginning with the Tiger Paw Invitational on February 13-14. The Tiger Invitational will be held February 21.

The outdoor season gets underway March 20-21, with the Tiger track & field program traveling to the University of Miami (FL) for the Hurricane Classic. Clemson will once again compete in two outdoor meets at Georgia Tech, including the Yellow Jacket Invitational on March 27-28. In April, the teams travel to SEC schools Auburn and Tennessee for competition. Clemson will compete at the Sea Ray Relays in Knoxville, TN for the first time since the women’s team made the trip for the 2002 meet.

The ACC Outdoor Championships will be held at Miami’s Cobb Stadium for the first time. Last season, Clemson’s men finished runner-up at the conference meet while the women finished in seventh place. The April slate will conclude with a traditional trip to Philadelphia for the Penn Relays at historic Franklin Field.

Clemson’s lone outdoor meet will be the Orange & Purple Classic, which is scheduled for May 8-9 at the Rock Norman Track. Following the home event, the Tiger teams will travel to Georgia Tech and to UNC on the weekend of May 15-17.

The NCAA East Region Championships will be held in Greensboro, NC for the second time in the last four years. The meet will be held on the North Carolina A&T campus at Irwin Belk Track. Last season, both teams from Clemson finished in the top 25 in the largest of the four track & field regions.

The NCAA Outdoor Championships will be held in Fayetteville, AR at John McDonnell field from June 10-13. It marks the first time the outdoor national meet will be held at the University of Arkansas.