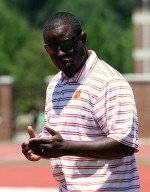 CLEMSON, SC – A total of 30 student-athletes from the Clemson track & field program earned official bids to the NCAA East Preliminary Round late last week. The NCAA released the list of accepted declarations for the outdoor meet scheduled for May 27-29 in Greensboro, NC. The top 48 declared individuals and top 24 relays were extended invitations under a new format featuring two preliminary round sites – East (Greensboro) and West (Austin, TX). The final rounds of the NCAA Outdoor Championships will be held June 9-12 in Eugene, OR.

Seventeen members from the ACC Championship and eighth-ranked women’s team earned spots in next week’s preliminary field. Clemson also qualified both the 4x100m and 4x400m relays on the women’s side.

April Sinkler once again led the way by qualifying in three separate individual events. She is ranked No. 1 in the East Region in the high jump and No. 2 in the long jump. Michaylin Golladay qualified in three individual events, and will take part in both relays as well. She holds a top-10 East Region time in the 100m hurdles.

In the women’s sprints, Stormy Kendrick and Kristine Scott both qualified in the 100m and 200m dash events. Kendrick enters the NCAA East Prelims as the No. 4 seed in the 100, while Scott holds the ninth-best time in the 200. Both will also compete in the relays.

Kim Ruck qualified in both the 5K and 10K. She was all-conference in both events last month at Clemson, and was an indoor All-American in the 5K. Also in the distance events, Alyssa Kulik and Stephanie Buffo made the field in the women’s 3000m steeplechase.

In the field, Patricia Mamona enters this weekend’s meet with the No. 2 mark in the East Region in the triple jump at 43’7.75″. She was national indoor runner-up in the event in March. Jasmine Brunson, a freshman from Southampton, Bermuda, qualified in the long jump, while graduate Nakeisha Wineglass will compete in the triple jump.

Linda Buchholz qualified in two events, the high jump and javelin. She ranks in the top 15 of the East Region in the javelin with a season-best throw of 152’0″. Bethanie Wachna is No. 4 in the region in the event, with a throw of 160’8″ in a runner-up performance at last month’s ACC Outdoor Championships.

The men qualified 13 individuals, as well as the 4x400m relay team.

Jordan Rispress round out the relay. Moss will be in the decathlon field next month at the NCAA Championships in Eugene.

Chris Slate and Jasen Turnbull both made the field in the 800m run. The two juniors dropped under the 1:50 mark in the event at the Orange & Purple Classic on May 7.

Clemson will have three participants in the men’s 110m high hurdles, led by All-ACC performer Spencer Adams. The two-sport standout also qualified in the 400 hurdles, but has chosen to concentrate his efforts on the high hurdles in Greensboro. He ranks No. 5 in the East Region heading into the meet. Charlton Rolle and Marcus Maxey also made the preliminary field for the high hurdles.

Josh Fowler qualified in a pair of jumping events. The red-shirt junior from Inman, SC has come on strong in the 2010 outdoor season. He was All-ACC in the long jump and ranks as high as No. 14 in the East Region in the triple jump.

Xavier Tromp is the highest-ranked men’s athlete for the Tigers heading into the NCAA East Preliminary Round. Tromp, a French exchange student, set the Clemson record with a clearance of 18’0.5″ at the ACC Championships in a runner-up finish. He is tied for first in the East with Virginia Tech’s Yavgeniy Olhovsky.

Alex Padgett qualified in the shot put and hammer throw, while Zach Berg qualified in the hammer as well. Berg has produced the 12th-best mark in the East with a throw of 210’7″ at the Orange & Purple Classic. Padgett’s top hammer mark on the season is 207’5″, and top shot put effort was 57’9.75″ at the ACC Championships.