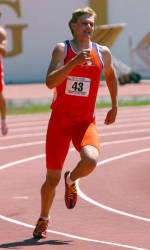 Clemson, SC – The Tiger track & field programs will host multiple competitions on Friday and Saturday at the school’s indoor facility. The inaugural Clemson Games, most of which will be held Saturday, and the sixth annual Multi-Event Challenge, are scheduled to begin Friday afternoon. The pentathlon begins at 1:00 PM, while the heptathlon is scheduled to start at 1:30. The events of the Clemson Games meet will start at 5:30 PM with the men’s and women’s 60m dash.

Miller Moss of Clemson hopes to earn a repeat first-place performance in the heptathlon. A sophomore from Sumter, SC, he became the first men’s athlete to win the multi-event competition for the Clemson program. Moss ranks fifth in school history in the heptathlon, having posted 5,206 points en route to a fifth-place finish at the 2008 ACC Championships.

Clemson will have a strong favorite in the women’s pentathlon competition in junior Liane Weber. A former ACC champion in the event, Weber won the JRF Multi-Event Challenge as a freshman in 2007. Her personal best is 4,089 points, which she achieved in winning the ACC crown. Linda Buchholz, a former NCAA provisional qualifier and the school’s #2 all-time performer in the pentathlon, is also scheduled to compete Friday.

Arguably the most anticipated event Friday could be the men’s 60m dash, where two-sport athletes C.J. Spiller are scheduled to run. Spiller, who chose to return to school for his senior season on the gridiron, is a two-time NCAA All-American in the sprints and owns the fifth-best 60m dash time (6.58) in school history. Of course, Ford owns the top mark at 6.52 when he captured the ACC crown as a freshman in 2007. Ford has already punched his ticket to the NCAA Championships by posting an automatic qualifying time of 6.59 three weeks ago at the Clemson Invitational.

The women’s 60m dash will take place at 5:30 PM Friday, followed directly by the men. Also on Friday, the women’s pole vault and men’s and women’s weight throw will be held. Nikola Lomnicka is the favorite in the 20-pound women’s event, despite being only a freshman. The native Slovak ranks fifth on the school’s all-time performance list.

Saturday’s events get underway at 10:00 AM with the men’s high jump and women’s shot put. The running events, which will be conducted on a rolling schedule, are slated to begin at 12 noon.

Among the most notable athletes competing Saturday for the Tigers will be Josh Fowler (long jump), Alex Padgett (shot put), Chris Spear (pole vault), and April Sinkler (high jump). Spear and Sinkler have already posted NCAA provisional qualifying marks, while Sinkler established the school record in the high jump with a 5’10” clearance at the Clemson Invitational.