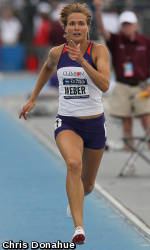 Patricia Mamona headlined the first-team selections by virtue of winning a second straight NCAA championship in the triple jump. She hit a mark of 46’1.25″ on the first jump of the finals, making her only the second female in Clemson track & field history to win more than one individual NCAA title. She concluded her career as a three-time All-American in the event.

Liane Weber also earned first-team accolades Monday. She was the national runner-up in the heptathlon, just one year after an injury forced her to miss the majority of the NCAA Championships. Weber, also a three-time All-American, amassed 5,857 points in the heptathlon in what was her best individual finish ever at a national meet.

Alyssa Kulik notched her first career All-America accolade by finishing fourth in the 3000-meter steeplechase. The Simpsonville, SC native established another school record in the championship final with a time of 9:57.51. Kulik is the first-ever All-American in the steeplechase for the Tiger women’s program.

Misha Morris. The seventh-place relay finish gave Edgerson and Golladay a total of three career All-America honors, and it was the first for Gracia and Morris.

The men’s team tied for 38th at the NCAA Outdoor Championships behind a terrific bronze medal effort by Moss in the decathlon. The graduate student out of Sumter, SC scored a personal best 7,996 points over a three-day span to follow up his national championship performance from indoor season.