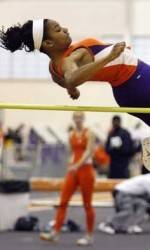 CLEMSON, SC – The Clemson track & field program will head in two different directions this weekend. A select group of student-athletes will travel to Fayetteville, AR for the Tyson Invitational, while several members of Clemson’s two teams will stay at home as the Tigers play host to the Tiger Paw Invitational.

The Tyson Invitational will be held at the University of Arkansas, the same facility that will play host to the NCAA Indoor Championships next month. Clemson will have a good representation in Fayetteville, led by the women’s field event trio of Patricia Mamona, April Sinkler and Liane Weber. Standout freshman Brianna Rollins will also compete in multiple events at the Tyson meet.

Action gets underway at the Tyson Invitational at 1:00 PM with the women’s 400m dash. La’Mont Jackson and Jordan Rispress are slated to compete.

Also on the track Friday, the men’s and women’s 60m hurdles will be held. Rollins is an NCAA provisional qualifier in the event, and she will lead a group of four competitors from Clemson. On the men’s side, both Spencer Adams and Charlton Rolle look to improve upon their NCAA qualifying times in the event. Prelims are scheduled for 3:00, with finals beginning at 8:20 in the evening.

Another highlight to Friday’s schedule will be Kim Ruck in the women’s 5K. A provisional qualifier at 3000 meters, Ruck looks to take a run at the school record in the indoor 5000m run this weekend. She is one of 21 scheduled entries at 8:40 PM.

In the field events Friday at Tyson, Mamona and Sinkler will compete in the women’s invitational long jump at 8:30 PM. Sinkler has already produced a strong NCAA provisional mark, while Mamona looks to join her as a national qualifier.

Saturday’s action at Tyson begins with the women’s 200m dash at 2:00 PM, an event that will feature four student-athletes from Clemson. Warren Fraser and Justin Murdock lead the men’s contingent in the same event immediately following. The Tigers will compete a pair of women’s relays in the 4×4, and one in the men’s race as well. The relays are the final track events, slated to begin at 5:15 Saturday.

In the field Saturday, Sinkler is entered in the invitational section of both the high jump and triple jump. Mamona, an auto qualifier in the triple jump, headlines the Tiger group in the triple jump. She established a personal best and jumped over 45 feet last weekend at Virginia Tech.

The Tiger Paw Invitational will feature 24 schools and over 1,100 student-athletes for the two-day meet. Clemson’s top competitors at the event are on the field event side – Xavier Tromp (pole vault). Tromp is a provisional NCAA qualifier, while Kennedy is the school’s indoor record-holder for the women’s vault. The pole vault competition will begin at 12 PM Saturday.

Friday’s action will feature several track events, including the men’s and women’s mile. Clemson will have three entries in the women’s mile at 6:00 PM – Lauren Reen. Also competing on the track Friday for the Tigers will be freshmen Claudio Delli Carpini and Dailyn Moore in the men’s 60m hurdles.