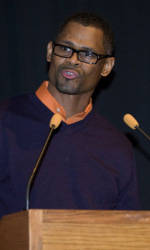 CLEMSON, SC – The Clemson track & field program held its 2010 awards banquet Wednesday evening at the Madren Center. Athletic department officials and members of the coaching staff presented awards to the top student-athletes in the program for the 2009-10 season.

The event featured keynote speaker James Trapp, a 10-time All-American in track for the Tigers from 1990-92. He was an NCAA 200 meter champion as well as a 1992 Olympian for the United States. Trapp was also a standout defensive back at Clemson and went on to play 11 seasons in the NFL.

In addition to all previously announced awards, the team recognized its most valuable performers and coaches award winners (given to athletes that went above and beyond for the good of the team) based on voting by full-time staff members.

For the complete list of award winners, click on the PDF link below. Photos from the event are also available.