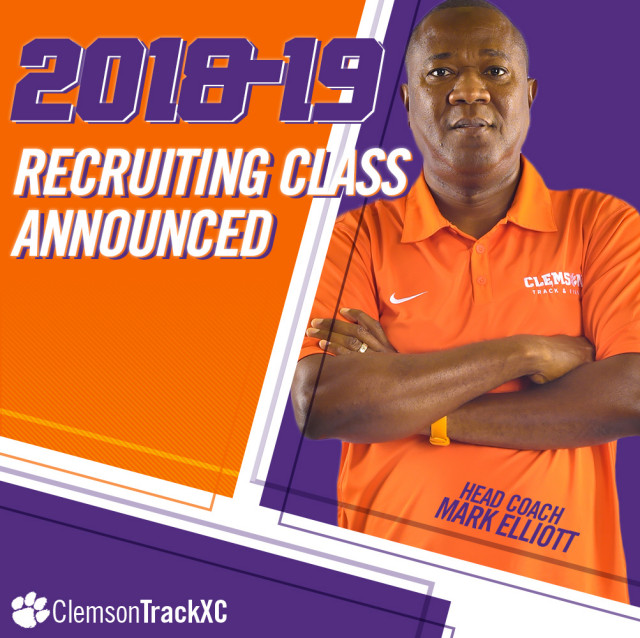 Augustin-Mayers, who specializes in the hurdles, most recently placed second in the 100m hurdles at the Princeton Sam Howell Invitational. Augustin-Mayers comes from Essex County College, where Ranee Ricketts and Kirk Lewis once competed.

“Juwan is hurdler out of Barbados, which that country has world champions in those event areas,” said Elliott. “I think he is a strong potential guy for us. With the training, I can see him being a top national competitor for us as well.”

“Zico Campbell is a big-time signing for us in our throws group. Traditionally, over the years that I’ve been here, that’s a group that needed to be shored up and get some high-caliber athletes. I think with the signing of Vashon McCarthy earlier this fall and now Zico, who is a CARIFTA Games champion and ranked on the junior list, is great for that group.”

Cooney is well-rounded athlete that has shown potential in both long sprints and hurdles. She placed second at the 2017 NCHSAA (North Carolina) 3A Midwest Regional championship in both the 100m and 300m hurdles. Her PR of 1:14.20 in the 500m dash was good for No. 1 in the state entering the 2018 NCHSAA 3A Indoor State Championship meet.

“Olivia is what I would call a strong student-athlete. She’s coming here on an academic scholarship as well as an athletic scholarship. I think she’ll be a person who will emerge and help us on the conference level and hopefully on the national level at some point.”

Coggin will look to make an impact on the Tigers’ cross country team and distance unit. She PR’d on the 2017 Early Bird Endurance Invitational on the 1600m course and placed fourth at the 2017 Music City distance Carnival after running a 5:02 mile. Coggin was also the 800m runner up in at the 2017 TSSAA (Tennessee) State Track & Field Championships.

Wirtz, like Coggin, joins Clemson’s cross country and distance squads. She placed 11th in the 1600m at the 2018 Florida Relays – one of the biggest high school meets in the country. She PR’d in the mile at the 2018 Marist Mile Time Trial in which she placed second overall. In 2016, she won the girls GHSA (Georgia) State Championships title in the 3200m after achieving a PR of 10:54.72.