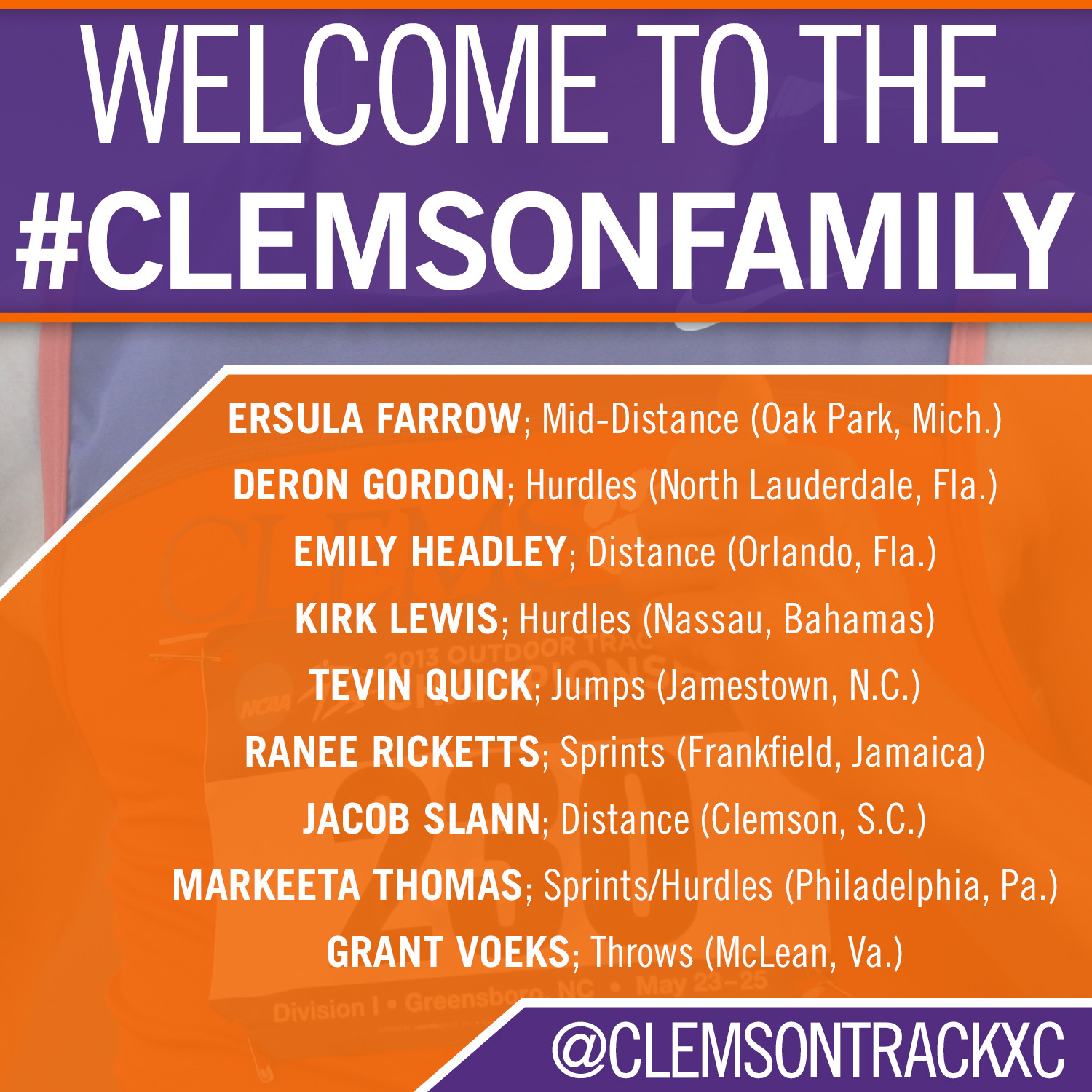 CLEMSON, S.C. — Head Coach Mark Elliott and his track & field staff signed nine student-athletes to national letters of intent during the most recent signing period. Five men and four women have joined the Clemson family from the class of 2015. It adds to the six student-athletes that signed in November with Elliott’s program.

“We had a very good early signing period,” Elliott said. “The additions of this past week give us a more comfortable feeling of having a well-rounded program. We’ve added some very good athletes. All the coaches are very excited about the total signing class.”

Elliott’s take: “Ersula has range like Natoya (Goule). She can help on the relays, and can run the 800 and mile. When you have athletes like that, you can cover more event areas.”

Elliott’s take: “The thing I respect most about Deron (Gordon), he has his mind set on being a great 400 hurdler. He ran his PR, 50.9, the same week he signed with us. That can help us right now. He’ll be a big addition to the team, because we don’t currently have that event covered.”

• Also won the district competition as a junior in 2013

Elliott’s take: “Emily will add depth to our cross country team and is someone we believe will grow into a significant contributor as it relates to track.”

Elliott’s take: “I never knew much about Kirk prior to the JUCO Nationals in Albuquerque. I spoke with him after the competition, and he was intrigued with Clemson. He visited and it was a quick commitment. He has an interest in being an engineer, so academics played a big role in him choosing us. We’re losing two good hurdlers, so we need to replace them.”

Elliott’s take: “We lose Shai Carpenter, so we needed someone to pair with Ishmael Kamara. Tevin was found by Coach (Chris) Bostwick, and we think he’ll get better over time and be a big part of the program down the road.”

Elliott’s take: “Ranee comes from a junior college with a great reputation for their level. The kids that move on always seem to excel at an unbelievable level. She’s a great addition in the sprints. She’ll come in and give us another boost.”

Elliott’s take: “Jacob is a local kid, and it’s always good to keep them home. He was looked at by other ACC schools. I think he can help us big in cross country. He’s a good miler, too.”

Elliott’s take: “Markeeta’s from a family of talented athletes. I’m like family to them. It’s more than just signing a great athlete; she’s someone I’ve seen grow up. Her sister did well for us at LSU, and now I have an opportunity to coach Markeeta. She can be very good from the short hurdles, 400 hurdles, to the 4×4.”

Elliott’s take: “Grant is probably 6-5, nearly 280 pounds. But he has actually run 26 seconds in the 200 meters. He’s very fast for a big guy. Coach (Robert) Weir has a background of turning great athletes into throwers, and that’s our plan.”