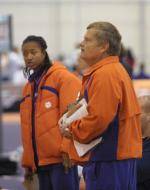 Once again, Clemson Athletics is encouraging all Tiger fans to show their spirit and wear orange for the One Clemson…Solid Orange event that will take place on Saturday, April 3, as the men’s and women’s track and field teams host the Clemson Invitational. The meet will be held at the Rock Norman Track and Field Complex and will feature Clemson, Appalachian State, Arkansas State, East Tennessee State, Florida A&M, Howard, Illinois and Pittsburgh. Saturday’s field events will begin at 11:15 AM with the men’s hammer throw, women’s pole vault and women’s javelin. The running events are scheduled to begin at 1:00 PM with the women’s 3000m steeplechase. The Clemson Invitational will conclude with the women’s and men’s 4x400m relays at 5:50 PM and 6:00 PM, respectively.

During the 2003-2004 season, at selected men’s and women’s basketball, men’s soccer and baseball games, an additional fee will be applied to each game ticket sold for the designated One Clemson…Solid Orange event. The proceeds from the One Clemson event will be used for specific One Clemson academic efforts. The One Clemson concept recognizes the strength of unity in everything we do as a University. The One Clemson Fund supports the University’s academic goals that will further enhance the ability of Clemson University to make for a stronger South Carolina and nation.