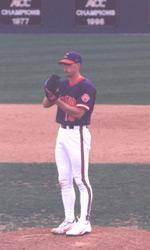 Top-ranked Clemson scored all the runs they would need in the first inning with three runs on its way to a 6-2 win over Coastal Carolina Wednesday afternoon at Doug Kingsmore Stadium. Clemson improved to 20-1, while dropping the Chanticleers to 16-10.

Tiger starter B.J. LaMura, making his first career start, yielded just two hits, two walks, and no runs while striking out seven in 5.0 innings to get the win. The decision was also the Ronkonkoma, NY native’s first of his career. The Chanticleers did, however, manage to score two runs (both earned), ending Clemson’s 44.2 consecutive innings pitched streak without allowing an earned run. Tiger pitchers did not allow an extra-base hit in the two-game series, allowing just 10 singles total. Coastal Carolina starter Brian Waack (2-1) suffered the loss.

The Tigers got on the board first in the first inning, plating three runs, thanks in part to two Chanticleer errors. Leadoff hitter L.J. DeMaino tripled to right-center and scored on Kyle Frank’s sacrifice fly. Khalil Greene and Jeff Baker each reached on fielding errors. Greene came around to score on Jarrod Schmidt’s RBI fielder’s choice. Then Baker scored on a double steal.

Clemson took a 4-0 lead after David Slevin, who led the Tigers with three hits, led off with a double down the right-field line and scored on Collin Mahoney’s single through the left side. Mahoney also had two hits. Slevin and Mahoney, Clemson’s #8 and #9 hitters, respectively, in the order, were the only two Tigers with multi-hit games. They also accounted for half of the Tigers’ 10 hits. The Tigers added another run in the fifth inning when Ryan McGraw booted a single by Greene, allowing Frank to score.

The lead was in jeopardy in the sixth when Coastal Carolina threatened. McGraw walked and Brandon Powell followed with an infield single. McGraw later scored on a wild pitch, followed by back-to-back walks by Justin Owens and pinch-hitter Morgan Snow. After Adam Keim fouled out for the first out, Tyler Lumsden walked in the second Chanticleer run. On came reliever Patrick Hogan, who got pinch-hitter Josh Komnick to strike out looking and Chad Felty to ground out to end the inning.

The Tigers added an insurance run in the seventh inning. Pinch-hitter Chad Coder led off with a single through the left side, advanced to second on a sacrifice bunt by Frank, and later scored on a bases-loaded walk to Schmidt. Meanwhile, veteran relievers Thomas Boozer and Paul Harrelson combined to pitch the final 3.0 innings to close out the game.

Clemson will play host to Maryland this weekend to open its ACC season. Game one is Friday at 7:15 PM. The series will conclude with games Saturday (4:00 PM) and Sunday (1:00).