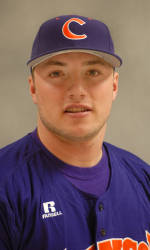 Top-ranked Georgia scored four of its six runs on six of its 10 hits in the third inning and held on to defeat #17 Clemson 6-5 in front of 3,045 fans at Foley Field on Tuesday night. Georgia improved to 23-3, while Clemson fell to 18-8.

Bulldog Starter Jason Leaver (3-0), who was on a pitch count, earned the win by pitching 3.0 innings, allowing one run on four hits with four strikeouts. Dean Weaver pitched the final inning to record his fifth save of the season.

Tiger starter Chris Dwyer (2-2) suffered the loss, as he allowed five runs on eight hits in 3.0 innings pitched. Clinton McKinney, Tomas Cruz pitched well out of the bullpen. In 5.0 innings pitched, they combined to allow just two hits, one run, and one walk with eight strikeouts. In all, the four Tiger hurlers combined for 12 strikeouts against only two walks.

Jeff Schaus gave Clemson a 1-0 lead in the first inning when he blasted a two-out, solo home run to right field, his fifth long ball of the season.

In the top of the second inning, Clemson put runners on first and second with no outs. After the next two batters were retired, Brad Miller hit a drive to the deepest part of the ballpark in right-center, but centerfielder Zach Cone made a leaping catch against the wall to save at least two runs.

The Bulldogs then took the lead with four runs in the bottom of the second inning thanks in part to some well-placed hits. Michael Demperio drew a one-out walk and went to second on Johnathan Taylor’s infield single. Peter Verdin then laid down a bunt right back to Dwyer, but the Tiger lefthander slipped while attempting to the field the ball, allowing Verdin to reach on the single and load the bases. Rich Poythress followed with a slow roller between the mound and first base that went for a single to score Demperio. Massanari’s two-run single up the middle plated Taylor and Verdin, then Joey Lewis singled through the left side. Poythress scored on the play when Schaus booted the ball in left field.

Clemson cut Georgia’s lead to one run in the fifth inning. Schaus walked with one out, then two batters later with two outs, Kyle Parker lined a long two-run homer to left-center. It was his fourth home run of the season. Miller followed with a single to left-center and scored on pinch-hitter Chris Epps’ double to left-center.

The Bulldogs doubled their lead in the sixth inning when Colby May led off with a home run to left field, his eighth homer of the year.

In the ninth inning, Schaus hit a one-out double to left and scored two batters later on Parker’s two-out bloop single to right-center. But after fouling off several two-strike pitches, Miller struck out on a 3-2 changeup to end the game.

Poythress, Massanari, and May had two hits apiece for Georgia, while Massanari totaled a team-high three RBIs. Of Georgia’s 10 hits, five were infield singles.

The Tigers outhit the Bulldogs 11-10 and had four extra-base hits to Georgia’s two. It was the first time in 15 games in 2009 that Clemson outhit its opponent and lost. Schaus went 3-for-4 with a homer, double, three runs, and a walk, while Parker went 2-for-5 with a homer and three RBIs.

Clemson and Georgia will play again on Wednesday night at Doug Kingsmore Stadium. First pitch for the game, which will be televised live by CSS, is scheduled for 7:06 PM.