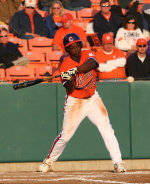 Moskos (1-0) came on in the eighth with a runner on third base and one out. After walking a batter, he struck out Brent Weiss, then got Mike Laird to ground out to end the threat. He then retired all three batters in the ninth to close out the win. George Mason reliever Jason Koziol (0-1) suffered the loss.

The Tigers opened the scoring in the bottom of the first. Addison Johnson led off with a walk, stole second, and reached third on a groundout by Chalk. Johnson later scored on Taylor Harbin’s RBI groundout to shortstop.

The Patriots responded with a run in the third inning to tie the score. Spencer Wiggins reached on a walk with no outs and then stole second. With one out, Chris Romanow singled to left center to drive in Wiggins.

Widmann singled to right center in the fourth inning with one out and later stole second. Ben Paulsen grounded out to shortstop, advancing Widmann to third. With two outs, Hogan lofted a fly ball to deep right field. Laird, who entered the game for an injured Wiggins, dropped the fly ball, allowing Widmann to score.

The Patriots took the lead with three runs in the fifth. Weiss singled to second base. With one out, Fournier reached on a walk. Romanow then singled to right, plating Weiss. Krieger followed with a walk to load the bases. Jason Bour hit into a fielder’s choice to shortstop. Clemson retired Krieger at second, but Harbin’s throw to first was errant. Fournier and Romanow both scored, giving George Mason a 4-2 lead.

Clemson evened the score in the seventh inning with two runs. Chalk led off with a single through the right side. After Dan Gerjets retired the next two Tigers, Marquez Smith sent a towering two-run home run to leftfield to tie the score 4-4.

Hogan began the Tiger rally in the eighth with a hustle infield single. With two outs, Brad Chalk singled to right field, as Hogan advanced to third. Harbin reached on a fielding error by third baseman Ryan Uphouse, as Hogan scored the eventual game-winning run.

Clemson returns to action on Wednesday to face High Point for a 4 p.m. contest at Doug Kingsmore Stadium.