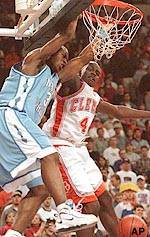 Tony, Is it hard knowing that you could have possibly played in the NBA, but were not able to because of your back? Do you still stay in tough with some of the other guys that were on your team like Greg and Terrell?Jordan Vaughan Norcross, Georgia

Its hard sometimes knowing I could have played in the NBA, but I am playing professionally, and I am a professional…. playing in England it’s just like I am playing in the NBA, its just a different country. I do the same things that the pros over here do, it’s just that I am a pro in England. I do stay in touch with Terrell, Greg, Tom, and Harold. Actually, I got to play against Tom when he was in London, so I got to see him a lot. I stay in touch with Greg and seen some of his games…I have not gotten to go to Dallas and see him, but I will be doing that next year. All the other guys are doing well.

Tony, If you do get into the NBA, what team would you most like to play for?Daniel Sharpe Lexington, SC

That’s a tough question, because I would just like to play anywhere. Once your in the NBA its pretty much the same anywhere. I don’t know if I’d choose to play for Pat Riley or Jeff Van Gundy because from what I hear, they are really tough coaches. Just kidding, I wouldn’t turn them down, that’s for sure.

Tony, What is your early prediction on the Tigers this season? How well do you see them doing in the ACC? Who do you think will fill Will Solomon’s shoes as a leader on the court?Joey Davis Aiken, SC

My prediction for the Tigers this season is that they will do better. I know that is easy to say, because they did not do that well this year. With a young team you just have to give it time to progress. My freshman year we had 7 freshman and we slowly progressed. I think that with how coach Shyatt does things, the team will be a lot better next year. The person that I think will take over the leadership role will be Jamar McKnight. He is the only senior on the team. From being here this summer I have seen him play and seen how he takes care of everything on the court. He seems like a leader to all the young players and he is a very good athlete.

Hopefully it won’t. Hopefully it will have more kids going into college instead of the NBA, because if you see there is a minor league you know that there is a medium instead of just going straight to the NBA, so you can go to college. On the other hand, if it doesn’t work out like in baseball you can just go straight into the Major leagues then they will put you into the Minor leagues. There are a lot of good baseball players going to college because of this system. They think that it is better to go for four years, and I hope that basketball players will be better off to go for four years of school and then try to get out and play professional.

Tony, I know that you are back in Clemson this summer and playing some with the young Tigers? Which young player impresses you the most on the Clemson squad?Jay Buckhaulter Atlanta, GA

Probably, Tony Stockman. I have seen shooters, but he is probably the best shooter I have seen because he shoots a lot, but he rarely misses and that is pretty amazing. The way he shoots it is a little different. He shoots from the hip like he is a gun fighter. It is an amazing shot.

Tony, What was your favorite memory at Clemson?Jack Klompus Hilton Head Island, SC

I had a lot of memories at Clemson both on and off the court, but one of my favorites was probably when we got announced for the NCAA the first time. They showed it on ESPN and we were jumping in the air and I think somebody actually put their hand through the ceiling. It was a just a great time to actually be a part of that for the first time in a long time.

Tony, What does Clemson need to do in order to consistently stay in the upper half of the ACC? I know you were recruited by other programs and have played at all other ACC venues. I know Clemson will not be able to stay ahead of the UNCs and Dukes, but I think it is reasonable to get ahead of the UVAs and NC States of the conference, much like when you were at Clemson.Ben Guerry Charlotte, NC

It’s tough…you just have to have the attitude that you are just as good as them…because the only thing the people who went to North Carolina and Duke have behind their names is that they were All-Americans. They played against good competition in high school, but they did not play against everyone…so it is hard to call them an All-American. If you have it in your head that they your better then them like we did here, then you do not care what anybody else has to say.

Tony, I am a huge Larry Shyatt supporter, and know that you are as well. His recruiting classes have shown that he can get the job done in time. What traits does Coach Shyatt have that draws recruits to him and Clemson? Randy Enwright Walterboro, SC

The main thing that draws people in is that Coach Shyatt treats us and everything as a family. As soon as you get on campus you are a part of the family…and Clemson as a whole is a family…everyone is kind to everyone. Coach Shyatt acts as a father figure and a friend with whatever you need. When he is on the court he kind of gives you a little freedom, but he shows how you are supposed to act. I think young people like that.

Thanks for your interest, everybody. Go Tigers! Tony Christie

Next week’s guest on “Ask The Tigers” will be Offensive Film Graduate Assistant and Clemson record holder, Justin Watts.