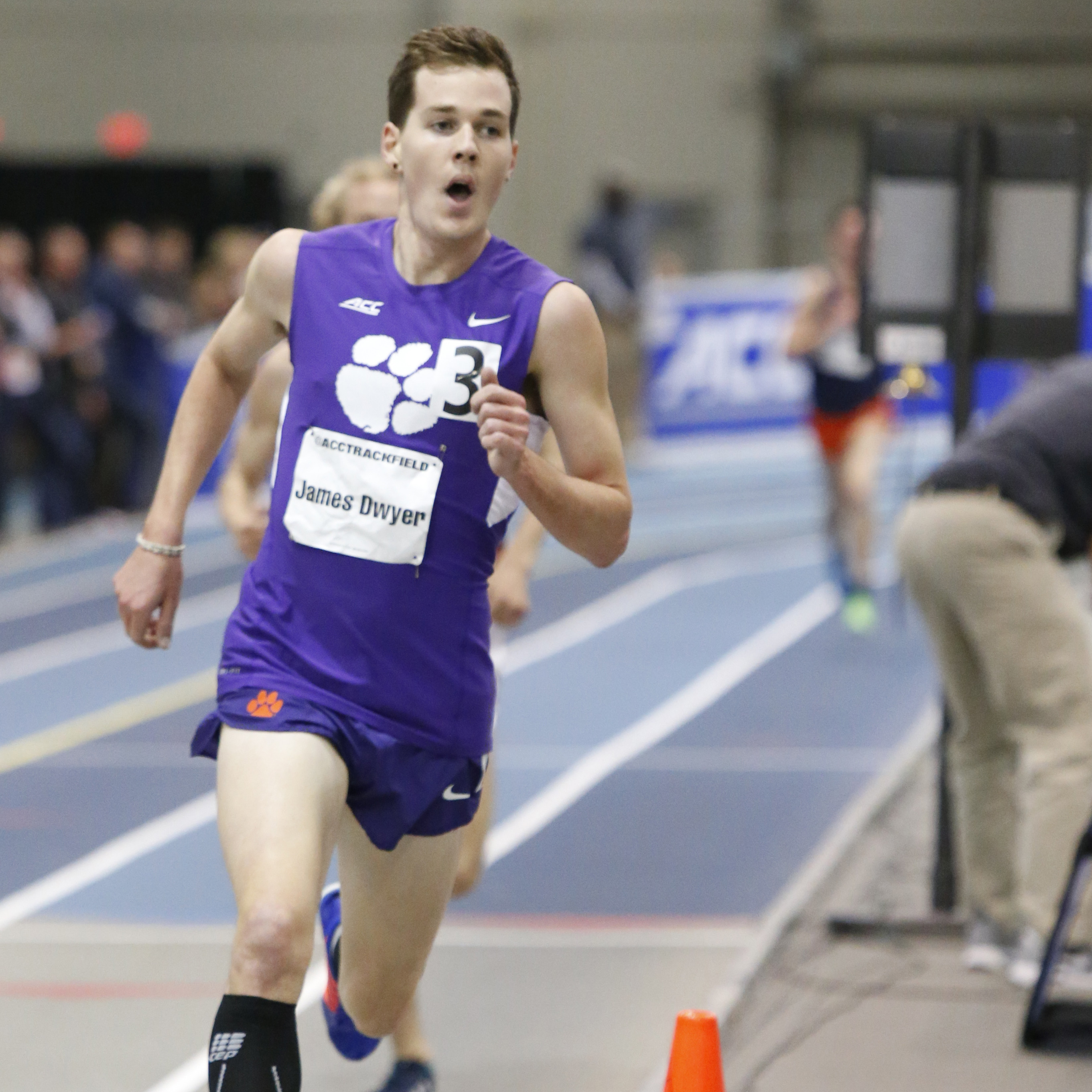 CLEMSON, S.C. – It doesn’t matter how talented a student-athlete is, each and everyone of them has a dream of how their athletic career is going to end. Everyone of them wants to go out achieving whatever success they have set out to accomplish.

However, the unfortunate reality is the majority of the time athletic careers end, they end in tears of sorrow. We are raised as children to dream big, and that we can accomplish anything we set our minds to in life. However, in athletics so many young men and women fall short of their dreams after pouring their hearts and their souls into their craft.

On Friday night, James Dwyer will be the exception. At 10:25 p.m. EST his dream will become reality when he takes the track for his final race as a Clemson Tiger in the 5,000 meter run final at the NCAA Outdoor Track & Field Championships.

“I’m just looking forward to a huge crowd coming out to watch track,” said Dwyer. “The crowd at Hayward field is legendary, and I’m really excited to be a part of one of the marquee distance races on Friday night. The opportunity to compete at nationals has been a dream my entire college career. I feel so lucky to have made it this far, I really respect how difficult it is to make it to the national meet, and I really plan on soaking it in and appreciating it.”

Distance coach, Michael Porter recognizes the significance of tonight’s race and how special of a moment this will be for Dwyer and the coaching staff.

“What makes this year exciting about being able to coach James, has been being able to watch his maturity, his confidence and his knowledge of what it takes to make it at this level grow,” said Porter. “As a fifth-year senior, to be able to send him out – qualifying for his first NCAA Championship experience is awesome. It’s a well deserved achievement.”

Dwyer qualified for this week’s NCAA Championship when he captured one-of-two at-large spots available in the 5K with a 14:12.62 at the NCAA East Preliminaries in Jacksonville, Florida on May 28. He is Clemson’s first NCAA qualifier in the event since Matt Clark in 2007.

“We talk about making it count in our program as it relates to championship competition, and James certainly did that at the regional meet,” said head coach Mark Elliott. “He’s improved each season since we got here three years ago, and now it’s culminated with his first NCAA Championships bid.”

Dwyer has been working towards this accomplishment since his freshman season, making steady progression throughout his career. After suffering a stress fracture in his final race of his freshman season and finishing last in a race at Junior Nationals, Dwyer was determined to become the runner he knew he was capable of being. His sophomore season he shaved seven seconds off his collegiate best, but it was when Coach Elliott and Coach Porter arrived that brought out the best in Dwyer.

“Coach Elliott brings a lot of experience as a coach and as a top college athlete himself, which can really put my races in perspective when he offers advice,” said Dwyer. “Coach Porter brings a different type of confidence to practice and racing. He has the rare ability to push his athletes right to the edge at practice. As he says himself, he will never give us a workout that we can’t do.”

“Even our toughest days, I know we can get through because he so consistently gets our workouts right. That really translates to races. There’s been quite a few times this season that I have found myself in some top tier races, with runners that have much better times than I do. My faith in knowing that my coaches would never put me in a race that I don’t belong in gives me a lot of confidence when racing.”

After embracing his coaches’ training program, making better choices with his diet and personal life, Dwyer has seen everything come together for him in his final season as a Clemson Tiger.

“This year has been so big for me because it is a culmination of consistent good training over the last two years. There’s something that takes over a little bit when you realize that you are in your last year of competitive running. It’s a go big or go home mentality that really pushed me to put in some serious mileage over winter break and throughout the track season.”

“I also started working with our team sports psychologist on a weekly basis to work on mental strength. Mental preparation needs training just as much as working out on the track. The combination of a positive attitude at practice and running 100 miles a week really pushed me to the next level. That and having faith in Coach Porter.”

The success Dwyer has been able to achieve thus far has encouraged him to continue competing after college. Porter believes Dwyer will continue his upward trend and continue to develop as a competitive runner.

“He’s had consistent and uninterrupted training the past three years” said Porter. “Each year he’s learned more about what it takes for him to be successful and he still has room to grow. He still has more to learn. The biggest difference this year that I have seen in James, has been the confidence in himself to be able to trust and execute a race plan.”

Dwyer’s trust in himself and his coaches has led him to tonight where he will race alongside 23 of the nation’s best harriers. When he crosses the finish line, Dwyer will be one of the fortunate, select few to finish his collegiate career achieving his dream of competing in Eugene, Oregon at the NCAA Championships.