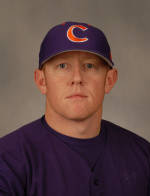 “We’re certainly glad to have Toby on our staff,” said Leggett. “We had him at camp the past few years and noticed him from the very beginning. His work ethic, loyalty, and knowledge of the game are outstanding. He’s an extremely hard worker with a great future ahead of him in the coaching field.”

In his nine years as a coach, Bicknell has coached a total of 24 players who have gone on to play college baseball, including six ACC players and seven Southern Conference players.

Bicknell, 28, earned his bachelor’s degree in physical education at Wingate in 2002. He later earned a master’s degree in sports administration at UNC Pembroke in 2006. A Charlotte, NC native, Bicknell was born November 15, 1978 in Houston, TX.