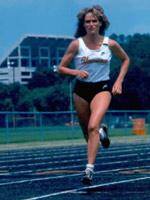 Tina Krebs to Join Ring of Honor on Saturday

Seventeen years after completing her athletic career for the Lady Tigers, Tina Krebs (Bahn) continues to garner awards that reflect the quality of her contributions on and off the cross country course and track. The native of Holbaek, Denmark, will be inducted into the Clemson Ring of Honor on Saturday during ceremonies prior to the Clemson vs. Furman Football game at Clemson Memorial Stadium.

Krebs made an impression in the Clemson and ACC athletic record books and academic annals that time has not diminished. That is one of the major criteria for selection to the Clemson Ring of Honor. An athlete must have made a significant contribution to the athletic heritage of Clemson University on an individual and team basis. The recipient must also be a college graduate and a member of the Clemson Hall of Fame.

It has been quite a year of recognition for Krebs. She was named to the ACC 50-Year Anniversary teams in cross country, indoor track and outdoor track last fall, then was inducted into the South Carolina Hall of Fame last May. On Saturday she will become the first track athlete inducted into the Clemson Ring of Honor and just the second female athlete to receive the honor.

A cross country, distance and middle distance runner for the Lady Tigers from 1982-1986, her versatility helped shape Clemson women’s track and field. She was a key component of a team that was a distance-only program until 1985, to a full track and field program beginning in the 1986 season. She was a big reason Clemson had seven top 15 final rankings in cross country and indoor track during her four years with the program.

Krebs is one of the most decorated athletes in Clemson history. She was an eight-time All-American in cross country, indoor track and outdoor track and was a three-time NCAA Champion. She was the first athlete in any Clemson sport to win three NCAA Championships. She placed seventh and fifth at the 1983 and 1984 Cross Country Championships, respectively, two of the highest finishes in Lady Tiger cross country history.

Krebs earned an undergraduate degree and a masters degree in architecture from Clemson and is now an architect in Denmark.