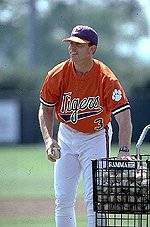 The official announcement of the award will appear in the November issue of the ABCA newsletter and the presentation to Corbin will be Sat., Jan. 6, 2001 at the ABCA convention in Nashville, TN.

Corbin is starting his eighth season at Clemson as the top assistant coach and recruiting coordinator for the Tigers. All eight of his recruiting classes have been ranked in the top 25 in the nation, including the 1999 class, which Baseball America ranked as the top class in the nation.

The 39-year-old native of Wolfeboro, NH is also respected for his on-field duties as a coach of the outfielders and his work with the hitters that has helped Clemson to three appearances in the College World Series (1995, 1996 and 2000).

“Tim does a tremendous job for our program in all that he does on the field and with recruiting,” said Clemson head coach Jack Leggett. “He has been very loyal to Clemson and we are extremely proud of the work he does. He is very deserving of this award. The ABCA did their homework on this one to name him assistant coach of the year.”

“Tim has been a significant benefit to Clemson, but he has also made significant contributions to the sport of baseball, ” Keilitz added. “We look for an assistant coach that we feel has done an outstanding job, not only as an assistant, but also for the betterment of college baseball. Tim is very highly respected by coaches and others in college baseball.”

That respect earned Corbin a coaching position this past summer for the Team USA Baseball that captured the event championship held in The Netherlands and set a record for best winning percentage. He was one of the assistants under head coach Mike Gillespie of Southern California.

Corbin came to Clemson in 1994 after six years as the head coach at Presbyterian College, a program he started in 1987. Corbin is also a former assistant coach at Wofford and a former graduate student at Ohio State, where he began his coaching career. Corbin graduated from Ohio Wesleyan in 1984.

This is just the second year for the award. Longtime Stanford assistant Dean Stotz was the award’s first recipient last year. An assistant coach in any division eligible.