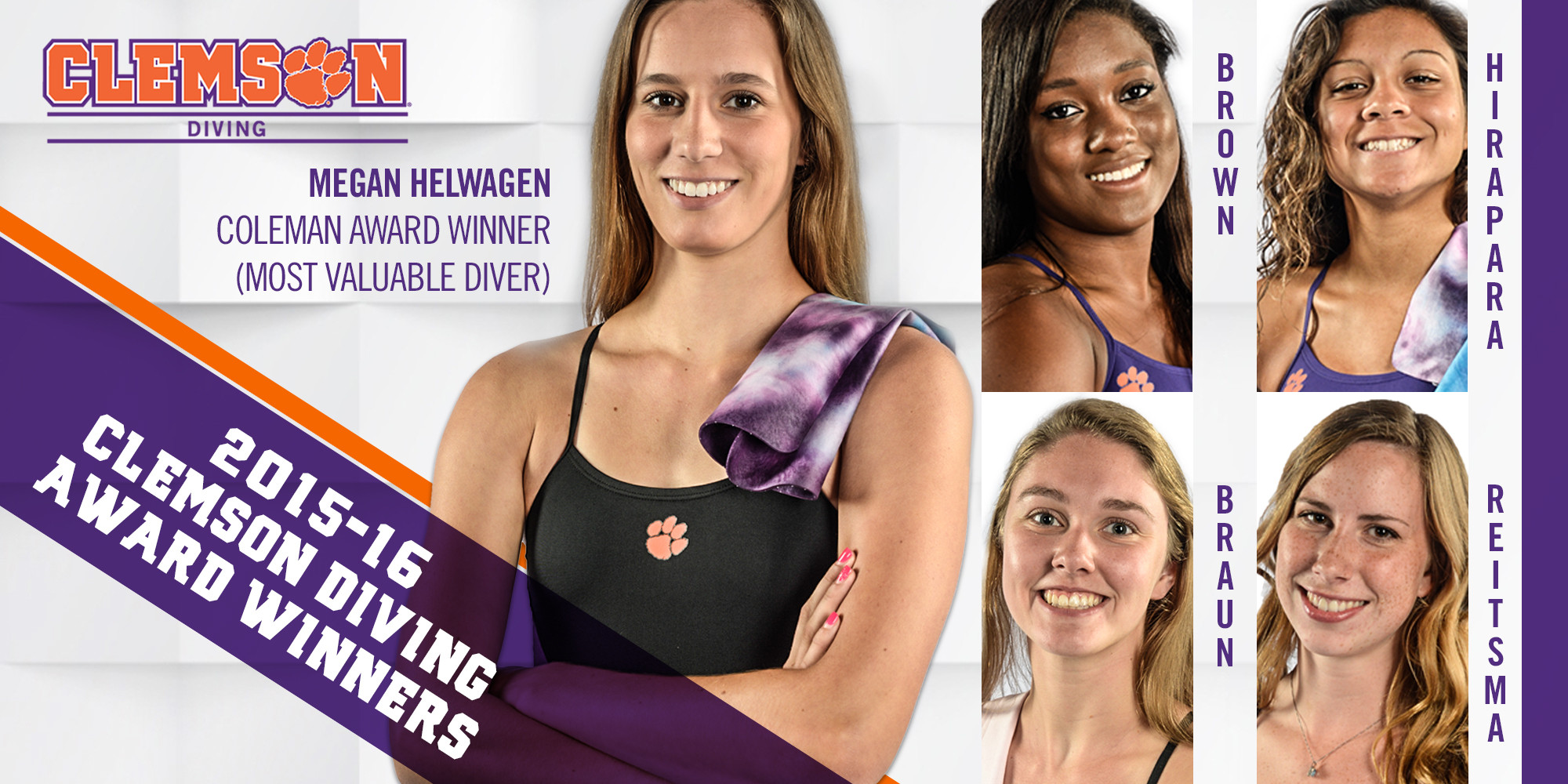 CLEMSON, S.C. – The Clemson diving program held its annual postseason awards dinner on Friday, April 22 at the Beyond the Bull restaurant in Seneca to close out the team’s 2015-16 season. Head Coach Leslie Hasselbach Adams addressed the team and support staff in attendance with words of appreciation and wisdom as she both applauded and thanked everyone in the room for a successful season and the respective roles they played in it.

Hasselbach Adams also announced the recipients of the Coleman Most Valuable Diver Award, and the Dwight Rookie of the Year Award, and recognized the divers with the highest point totals in the one-meter, three-meter and platform events on the year.

Senior Megan Helwagen was named the Coleman Most Valuable Award recipient after garnering the most competition points (148) across the three events and having been a staunch leader in and out of the pool throughout the course of the season. Helwagen ended her diving career in grand fashion. The Mason, Ohio native was the only Clemson diver to qualify for the finals in the one-meter event at the NCAA Zone B Championship meet, where she finished 16th overall. Her 15th-place preliminary finish in the one-meter was Helwagen’s career-best finish in any event at the NCAA Zone Championships. She qualified for the zone meet in all three events, all four years of her collegiate career, the only diver in Clemson program history to do so. In 2015-16 season, Helwagen recorded eight Zone-qualifying scores, earned 17 competition points for the team at the ACC Championships, and had seven top-five finishes on the year, including winning the one-meter competition against Georgia Southern on Jan. 9, 2016.

The Dwight Rookie of the Year Award was presented to Caylin Hirapara. The freshman from Jacksonville, Fla. came into her first year calm, collected and consistent in her competitive nature. She led all freshman with four Zone-qualifying scores and finished third in total points in the one-meter (52) and platform (28) events and was the only diver on the year to attain three Zone-qualifying scores in one meet, doing so at the Nike Cup on Nov. 19-21, 2015. Hirapara was the top point-earner amongst all freshmen, earned 15 team points at the ACC Championship meet for Clemson, and finished third on the team with 126 competition points attained on the season.

Braun was a critical component in the team’s success in 2015-16, as she was the second leading all-around point earner for the Tigers (119) on the year and top point-earner in the three meter event, (57) points. The junior also earned five NCAA Zone-qualifying scores over the course of the year. At the zone meet, Braun matched a career-best finish in any event at the meet, earning a 14th place finish in the Platform event and totaled 466.80 competition points, besting her score from the 2015 meet by 18.75 points. She also contributed 15 team points at the ACC Championship Meet with her performance across three events. Recently, Braun was named to the 2015-16 All-ACC Academic Women’s Swimming and Diving Team. This is the second-straight year that the Elementary Education major hailing from Beaverton, Ore., has been awarded the honor.

Danielle Reitsma repeated as the top point-earner in the platform event and once again did so convincingly. Reitsma was a force to be reckoned with all season, having earned eight Zone-qualifying scores (two on one-meter, three on three-meter, and three on platform). Her biggest moment, however, came at the ACC Championship Meet where she scored 251.70 points to earn seventh place and solidify a spot in the finals by placing in the top eight. Even after a balk on her last dive of the preliminary round resulted in a 20-point deduction on the score of her final dive, Reitsma was able to dive her way into Clemson history. She became the program’s first diver to ever earn a berth in the finals in any event at the ACC Championship meet.

Also at the banquet, the Tigers’ two seniors – Helwagen and Tabitha Banks addressed their teammates with words of thanks, encouragement and advice.