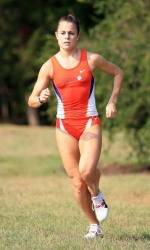 Padgett had a good start to his junior outdoor campaign, posting a throw of 194’7″ and finishing as the best collegian late Friday. In the women’s hammer, freshman Brittney Waller moved into the top 10 of Clemson’s record books with a mark of 159’1″.

Buffo’s school record led to an easy victory for the Spartanburg, SC native. She put together a time of 10:56.59, with her closest competitor over 27 seconds behind. Buffo also placed third in the 1500 meter run on Friday. In the men’s steeple, freshman Blake Kennedy placed third in his first-ever collegiate race. He crossed the finish line with a time of 9:32.70.

Saturday also marked the return to action of junior Bethanie Wachna, who was injured last season prior to the ACC Championships. The native of Canada had a personal best in the javelin throw of 147 feet, second-best in Clemson history. In other field action, Linda Buchholz won the women’s high jump after clearing 5’7″ on her third attempt.

Nakeisha Wineglass was runner-up in the women’s triple jump. Her best effort of Saturday afternoon was a leap of 40’6.75″ into a slight headwind.

The Tigers return to action next weekend in Atlanta, GA to take part in the Yellow Jacket Invitational.