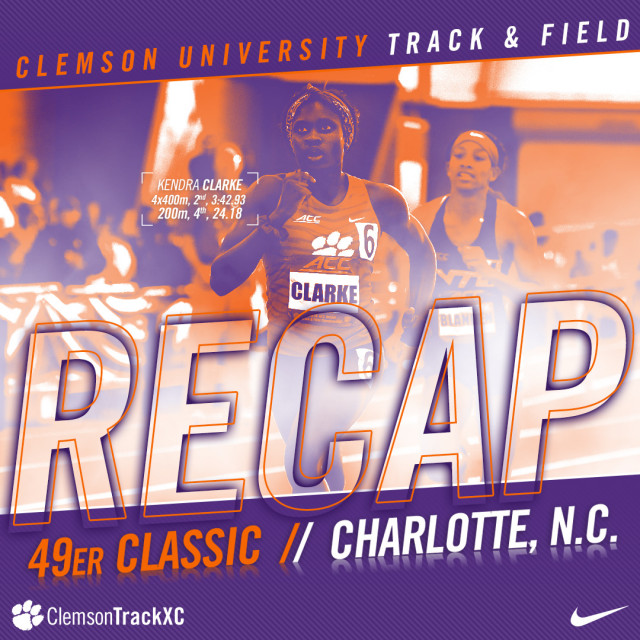 CHARLOTTE, N.C. – In Saturday’s final event of the 49er Classic, the women’s 4x400m relay unit consisting of Lakeisha Warner, Kendra Clarke, Torie Robinson and Rebekah Smith took second place at Charlotte’s Transamerica Field. The group posted a time of 3:42.93 in the first of eight sections. Tiondre Toomer, Trevious Frazier, Deron Gordon and Nate Gordon finished in fourth for the men as Nate Gordon crossed the finish line at the 3:11.94 mark.

In the men’s race, Frazier posted his all-conditions best with a time of 21.67 seconds to finish in third place in the second heat, and 13th overall. In his first-ever 200m dash, Toomer crossed the finish line in 21.81 seconds, placing fourth in the second heat right behind Frazier. Toomer finished in 17th overall among a field of 110 competitors.

In the women’s 800m, Katie Fortner achieved her personal best – 2:13.31 – to open individual events on the track Saturday. Fortner placed fourth in heat No. 1 and fifth overall. Right behind Fortner was senior Dana Maydew (2:14.33), who placed eighth overall in a group of 118 competitors.

In the throws, sophomore Grant Voeks achieved his personal best on his last heave of the day. His best distance of 50.45m earned him a fourth-place finish, his best career finish since placing sixth at the Georgia Invitational in 2016.

Up next, Clemson heads to Jacksonville, Florida, for the North Florida Invite (March 23-24). Live results can be accessed via clemsontigers.com