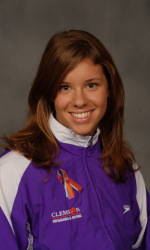 After moving up six spots following Thursday’s events at the Women’s ACC Swimming Championships, the Tigers hit the water Friday morning for preliminaries and showed that they can compete for a title. The Tigers closed Thursday’s meet with the ACC, Georgia Tech Aquatic Center, ACC Meet, and school record in the 200 free. Friday morning’s events put the Tigers in striking range for the finals at 7 p.m.

The session started with the 400 IM. Freshman Elizabeth Savage put in the fifth best time in Clemson history at 4:20.55. The time was fifth overall and put Savage in contention for the title in tonight’s final. Sophomore Carmen Groenewoud also put in a career best time with a 4:27.56, which was the 11th best time in the morning session. She will compete for points in the consolation final.

Michelle Parkhurst continued her breakout meet, recording the best time in the 200 free. On Wednesday night, Parkhurst’s leadoff split for the 800 free relay established a new ACC record at 1:44.74. Parkhurst’s Friday 1:46.30 is also an NCAA-A mark and would have beaten the old ACC meet record, had she not already set it on Wednesday. Parkhurst followed that up with the fastest time in the 100 back as well with an NCAA-A 53.90. This is a personal best time and beats her previous school record by 0.59 seconds.

Sophomore Katrina Obas continued her strong meet as well, recording the second-fastest time in Clemson History in the 100 breast with an NCAA-B 1:02.97 during preliminaries. She is only the second swimmer in Clemson history ever to clock in below 1:03.24. Savage put in another strong showing as well, recording a 1:04.58. The two combined to finish preliminaries fourth and eighth, which puts them into tonight’s final with a guarantee to score. Groenewoud also qualified for the consolation finals with a career-best 1:05.20.

The finals of these events as well as women’s 3-meter diving and men’s 1-meter diving and the 400 medley relay will take place starting at 7p.m. and can be followed on accselect or at theacc.com