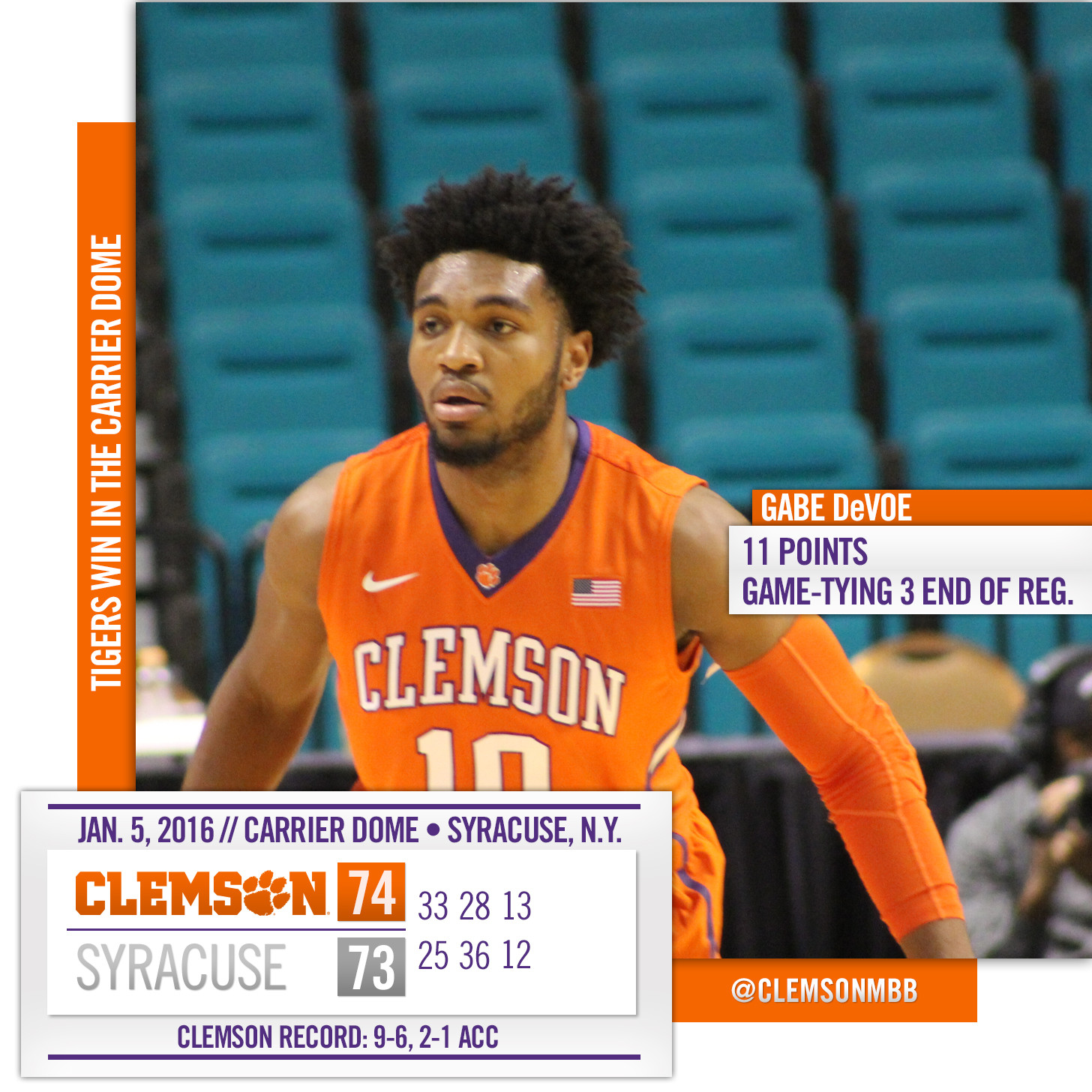 DeVoe hit a corner three to give the Tigers new life, and in overtime, Jaron Blossomgame and Landry Nnoko were unstoppable inside as Brad Brownell’s team won its second straight ACC game. Nnoko finished with a career-high tying 19 points and 10 rebounds, his first double-double of the season. Blossomgame finished with a team-high 20 points, while DeVoe added 11 off the bench. Jordan Roper added a career-high 10 assists.

The Tigers put together one of their best halves of the season in the opening 20 minutes. Clemson led 33-25 behind an offense that saw 13 assists on 14 made baskets. The Tigers hit 5-8 three-pointers, including 2-3 by both DeVoe and Avry Holmes. Conversely, Clemson’s defense was outstanding, holding the Orange to 30 percent shooting and just 4-16 from three-point distance.

DeVoe provided the highlight of the first half when he took a pass in the lane and went up for a two-handed stuff over a Syracuse defender, bringing the Clemson bench to its feet.

Syracuse made a run in the second half. The Orange trailed most of the way before closing to within two on a transition three by Gbinije with 8:51 to play. His bucket made it 50-48 in Clemson’s favor. ‘Cuse later took a 53-52 lead on a floater by Trevor Cooney, before DeVoe found Blossomgame on a beautiful alley-oop with five minutes to play.

Syracuse looked to be in winning position up three and at the free throw line inside the final seconds, but Brownell called a timeout. Malachi Richardson, who hit a fadeaway three that stretched the Orange lead, missed the second free throw with less than 15 seconds left.

The Tigers dribbled down and Donte Grantham’s extra pass landed in DeVoe’s hands in the corner, and the sophomore knocked down the biggest shot of his young career.

In overtime, Blossomgame helped push Clemson ahead quickly and the Tigers would lead by as much as four at 70-66 after Nnoko converted a three-point play. Still up four, Tyler Lydon hit a trailing three with 13 seconds left in overtime. That set up a second inbounds play for Clemson, who turned the ball over. But Trevor Cooney’s three-pointer to win was short and Clemson escaped with the victory.

The Tigers now face a three-game homestand. Clemson will take on Louisville on Sunday, January 10 before welcoming Duke and Miami to town next week as well. The game with the Cardinals is scheduled for a 12 p.m. tipoff from Bon Secours Wellness Arena.