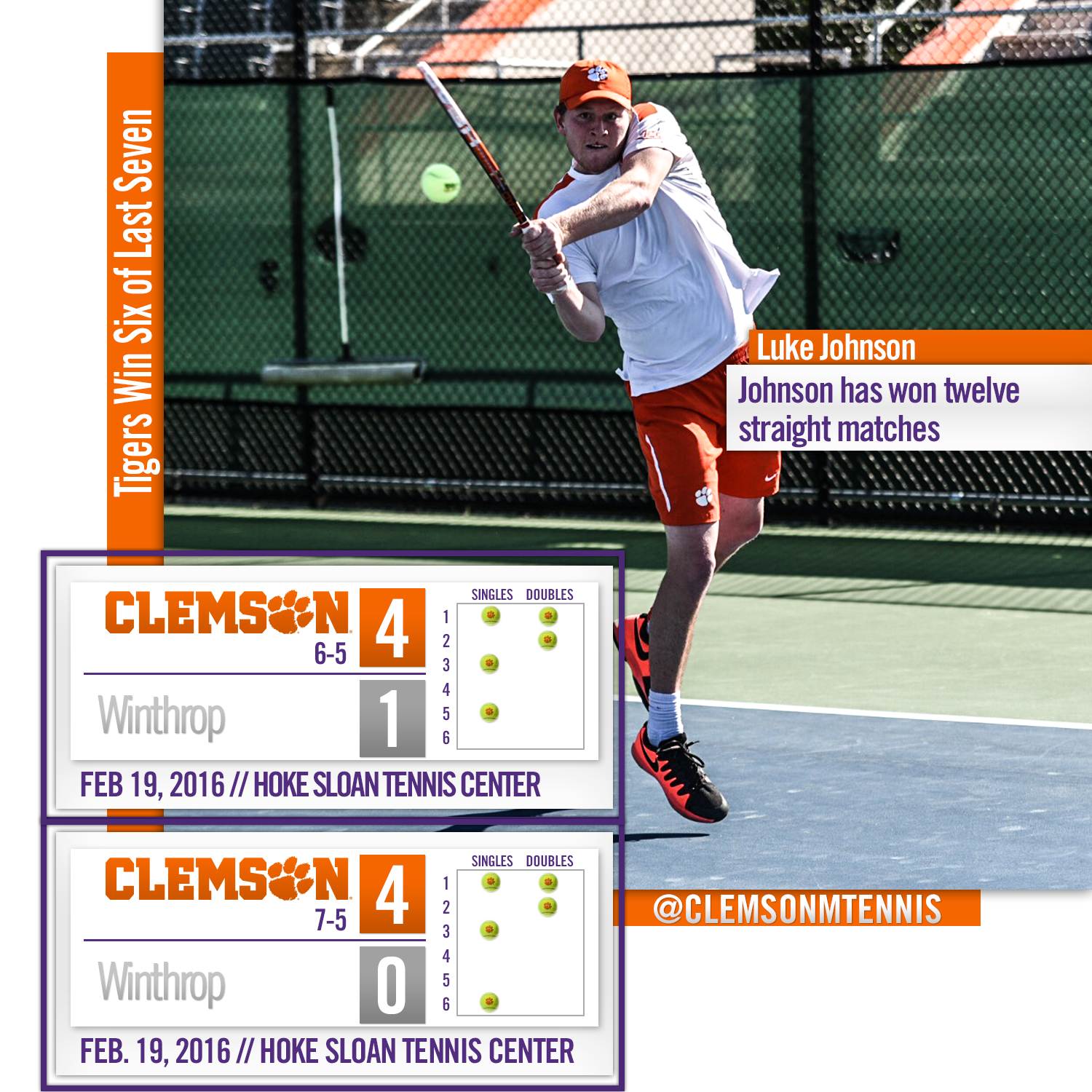 CLEMSON, S.C. – The Tigers have won six out of their last seven matches after todays doubleheader sweep. Clemson gained two impressive victories Friday afternoon at the Hoke Sloan Tennis Center. The Tigers defeated Winthrop in a doubleheader by the scores of 4-1 and 4-0. Clemson brings its overall record to 7-5 on the season.

“Six out of the last seven. We came out against a very good Winthrop team who won their conference last year and looks to win again this year. I am really impressed with the progress and incremental steps this team continues to take,” Said Head Coach Chuck McCuen. “Our players are becoming students of the game, putting the extra work in order to be successful on and off the court. More than anything they are buying into the mental and physical aspects of this game. It is fun to coach them and watch them at this point. With everything we are doing it does not guarantee a win but it sure puts us in a good position to win.”

In the first match against Winthrop, Clemson clinched the doubles point over the Eagles, winning on courts one and two. Daffra Sanon and Robert Dudley started off doubles strong, defeating their opponents on court two, 6-1. Alex Favrot and Luke Johnson then won 6-2 on court one, winning their last five doubles matches together. Play was then suspended due to clinching the doubles point

In singles play, Clemson gained three points from courts one, three and five. Luke Johnson continues to win quickly on court three for the third straight week. Johnson won in two sets, 6-1, 6-4, winning ten straight matches, including doubles play. Dudley fought back from a first set loss of 6-1, winning two straight sets 6-3, 6-0, to give the Tigers a 3-1 lead. Brent Lett fell in two sets on court six bringing the overall team score to 3-1. Freshman Alex Favrot then defeated his counterpart in three sets on court one to clinch the match for the Tigers. Play was suspended on courts two and four.

In the evening match against the Eagles, Clemson clinched the doubles point quickly. Alex Favrot and Luke Johnson won on court one, before Sanon and Dudley overpowered their opponents, 6-3, at number two doubles to clinch the point for the Tigers. Favrot and Johnson have teamed up to win six straight doubles matches. Court three was suspended due to clinching the doubles point.

Johnson has won twelve straight matches, defeating his opponent on court three, 6-3, 6-3. Christian Harris had a strong showing on court six, winning 6-2, 6-1 to bring the team score to 3-0. With impressive play from the freshman on court one, Favrot clinched the match for the Tigers winning 6-3, 6-3 on court one. Sanon was leading 5-2 before match was halted due to the clinched match.

Clemson returns to the courts next Saturday, February 27th, when the Tigers host rival South Carolina at 11 a.m. The Tigers will then face South Carolina State at 5 p.m. on Saturday night. Pending weather, the matches will be played at Hoke Sloan Tennis Center.