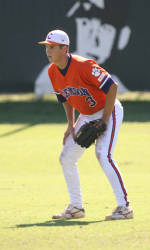 Sophomore Mike Freeman and freshman Jeff Schaus, the #1 and #2 batters in the lineup, each totaled three hits apiece. Freshmen Kyle Parker and Chris Epps added two hits and two RBIs apiece as well. They all helped Clemson end its 19-game streak of scoring six or fewer runs dating back to its 14-2 win over Furman on March 20. The 14 hits were also the most for the Tigers since that Furman game.

The Tigers took the game’s first lead in the third inning thanks to a Blue Devil miscue. Epps hit a one-out single through the left side and stole second. After moving to third on J.D. Burgess’ groundout, Freeman hit a routine groundball to second. But Gabriel Saade booted the ball, allowing Freeman to reach in a close play at first base and Epps to score. It was the first time in 14 games that Clemson scored an unearned run off an opponent’s error.

After the Tigers failed to capitalize on another Duke error and stranded runners at second and third in the top of the fourth inning, the Blue Devils took the lead with a two-out home run in the bottom of the fourth inning. Nate Freiman led off with a single up the middle. Two batters later with one out, Jonathan Nicolla hit a potential inning-ending double play groundball. But shortstop Matt Sanders booted the ball. He still recovered in time to make a spectacular behind-the-back “glove-flip” to retire Freiman at second base. Then on a 1-2 pitch, Saade belted a fastball up in the strikezone over the fence in left-center for a two-run homer. It was his fifth long ball of the year.

In the top of the sixth inning, Wilson Boyd reached on a two-out, infield single. Sanders followed with a “hustle” double to left field to advance Boyd to third. The Tigers finally came through in the clutch, as Epps blooped a single down the left-field line to score Boyd and Sanders, giving Clemson a 3-2 lead.

The Tigers added to their lead with two runs in the top of the seventh inning. Freeman and Schaus led off with singles. Doug Hogan moved both runners up a base with a sacrifice bunt. After Ben Paulsen was intentionally walked to load the bases, Parker singled through the left side to score Freeman and Schaus, upping Clemson’s lead to 5-2.

The Blue Devils came right back and scored two runs in the bottom of the seventh inning. Saade laced a 2-2 offering to center for a leadoff single. Kyle Kreick then rolled a perfectly-placed double over the third-base bag on another 2-2 pitch to move Saade to third. Saade then scored on a passed ball, as Kreick advanced to third base. After Jake Lemmerman struck out for out #1, Ryan McCurdy lined a ball to right field. Epps made a diving catch, but Kreick scored on the sacrifice fly to narrow the score to 5-4.

Clemson responded to Duke’s charge with two runs of its own in the top of the eighth inning. Epps reached as the leadoff batter when he was hit by a pitch. After moving to second on Burgess’ sacrifice bunt, Epps scored on Freeman’s single up the middle. Schaus followed with another single up the middle, as Freeman advanced to third base. On a 1-1 pitch to Hogan, Head Coach Jack Leggett called for a “suicide squeeze” bunt. Hogan laid the bunt down the first-base line and avoided the tag to reach on the single, as Freeman scored.

In the bottom of the ninth inning, Nicolla led off with a single through the left side. It was the sixth inning that Duke put its leadoff batter on base with a single. Saade followed with a liner to left-center, but Schaus made a running catch for out #1. Kreick then hit another single through the left side to advance pinch-runner Tom Luciano to second and bring the tying run to the plate. But Lemmerman fouled out and pinch-hitter Tim Sherlock struck out looking to end the game.

Kreick had three hits and Saade added two hits for the Blue Devils, who totaled 11 hits in the contest.

Clemson and Duke will play game-two of the three-game series on Saturday at 2:00 PM.