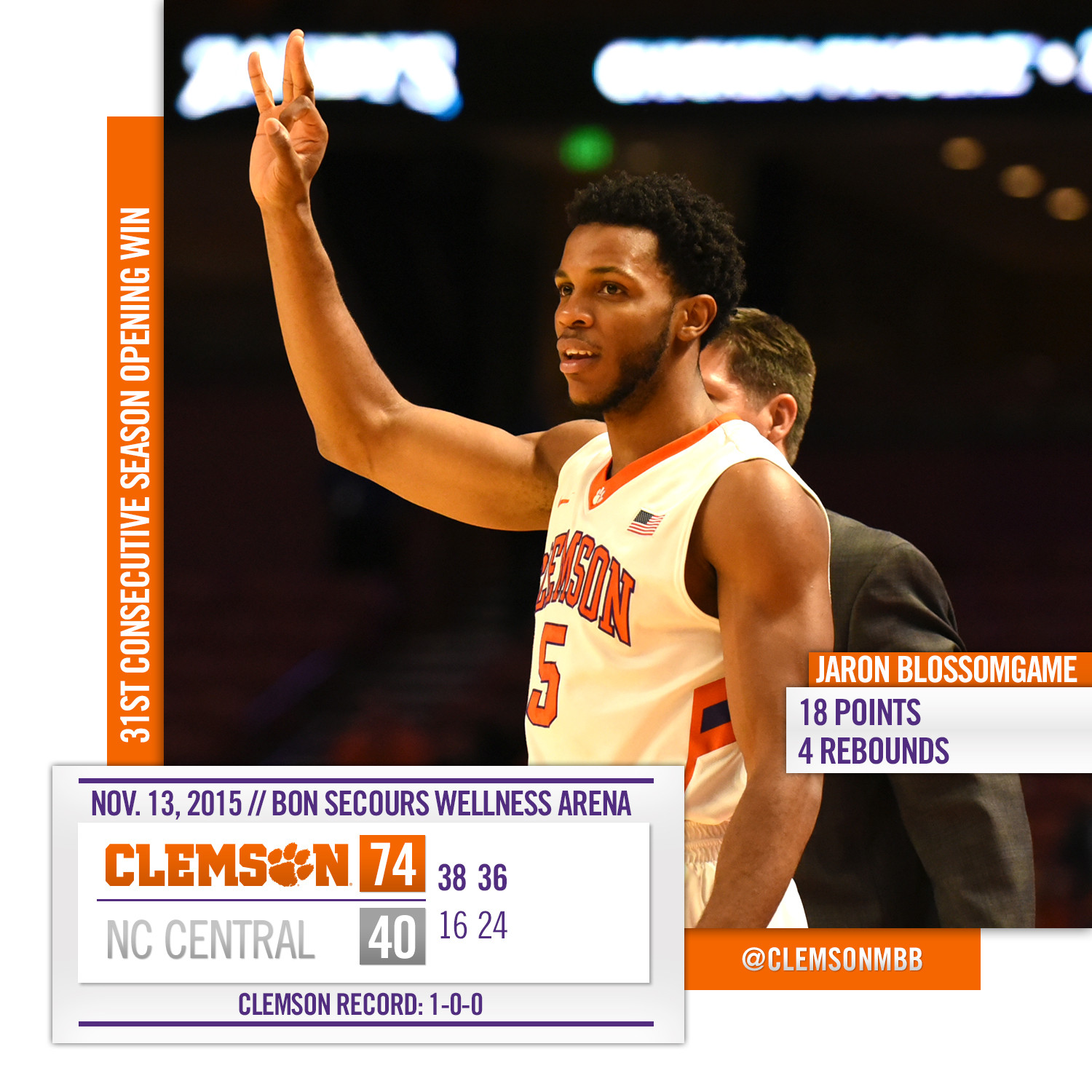 GREENVILLE, S.C. — The men’s basketball team opened its regular season Friday against North Carolina Central, and for the 31st consecutive season Clemson came away a winner. The Tigers used a 21-0 run in the opening half and a suffocating defense throughout the game to earn a 74-40 win over the Eagles in front of 5,742 fans at Bon Secours Wellness Arena. The Well is serving as Clemson’s temporary home while Littlejohn Coliseum undergoes a $63 million renovation.

Head coach Brad Brownell said he was proud of the strength of play that the Tigers displayed throughout the game.

“We were strong from the beginning, had control of the game and never let [NCCU] take a run,” he said. “I thought our guys executed well and made good decisions. I am proud of the way the guys played tonight.”

The Tigers were rocking The Well with their aggressive defense, holding NCCU to a mark of just 30 percent from the field (17-56). The defense tallied nine total blocks, with center Landry Nnoko tying his career high with six. Friday’s game was the first time in two years, to the day, that Clemson held a team to 40 points or less.

Blossomgame ignited the team with his energy and athleticism. He opened up the scoring after catching an alley-oop from Donte Grantham. Blossomgame had two early three-pointers and helped the team open up a 38-16 lead in the first half of play, scoring 16 by himself. Grantham hit two consecutive three-point field goals which helped the Tigers to 21 consecutive points. Grantham finished in double figures with 11, as did junior point guard Avry Holmes.

The Tigers took their biggest lead (36-point margin) of the night inside the final minute, after walk-on Lyles Davis had a steal and assist to fellow freshman Ty Hudson. Also turning in a strong second half was Sidy Djitte, who scored a career-high nine points, going 3-3 from the floor. Gabe DeVoe scored all nine of his points in the second frame as well.

The Tigers return to action in less than 48 hours. Clemson takes on UT San Antonio on Sunday, November 15. Tipoff is set for 2 p.m. at The Well.