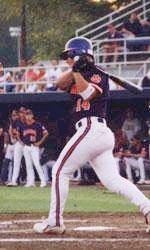 Tiger pitchers worked out of numerous jams and Steve Reba won his 29th career game as #1 Clemson escaped with a 2-1 win over Duke (19-22, 1-11 ACC) Sunday at Jack Coombs Field to sweep the series. Reba tied Kris Benson in the Clemson recordbooks for fourth place in wins and improved to 9-1 on the season. He also improved to 13-0 in his last 15 starts.

Freshman Tyler Lumsden pitched 2.2 scoreless innings to pick up his second save. Tiger relief pitchers were outstanding all weekend, allowing no runs and only three hits in 9.1 innings. Duke was 1-for-13 with men in scoring position on Sunday and 2-for-32 in the three game series. Starting lefty Tim Layden (4-6) suffered the loss despite allowing just two runs in 6.0 innings pitched.

Clemson (34-5, 10-2 ACC) did not get on the board in the first inning, but Khalil Greene broke the Clemson record for career hits with his 338th on an infield single to shortstop. Shane Monahan (1993-95) previously held the record. Greene finished the day 3-for-4, as did Jeff Baker to lead the Tiger 10-hit attack.

The Blue Devils finally broke the scoreless tie in the fourth inning. Layden led off the frame with a double to center, advanced to third on Bryan Smith’s groundout, and scored on Troy Caradonna’s swinging bunt single. Catcher Collin Mahoney tried to pick up the ball and tag the runner coming home, but was unsuccessful picking up the ball.

Clemson took the lead right back in the sixth inning. Four consecutive singles by Kyle Frank, Greene, Baker, and Jeff Hourigan grounded into a double play, but Greene scored on the play to give Clemson a 2-1 lead.

In the bottom of the sixth, Duke loaded the bases with no outs on a single by Drew Jerdan and back-to-back walks by Layden and Smith. But Reba came through, striking out Caradonna and getting Grant Stanley to hit into a 1-2-3 inning-ending double play.

Duke threatened once again in the seventh inning. After a leadoff walk followed by a single to right field, Kevin Kelly advanced the runners to second and third on a sacrifice bunt. Relief pitcher Tyler Lumsden got Larry Broadway to pop up to shortstop and Mike Miello to ground out to end the inning.

Clemson’s next action comes Tuesday when it faces Furman at Doug Kingsmore Stadium at 7:15 PM, while Duke plays host to East Carolina Tuesday at 7:00 PM.