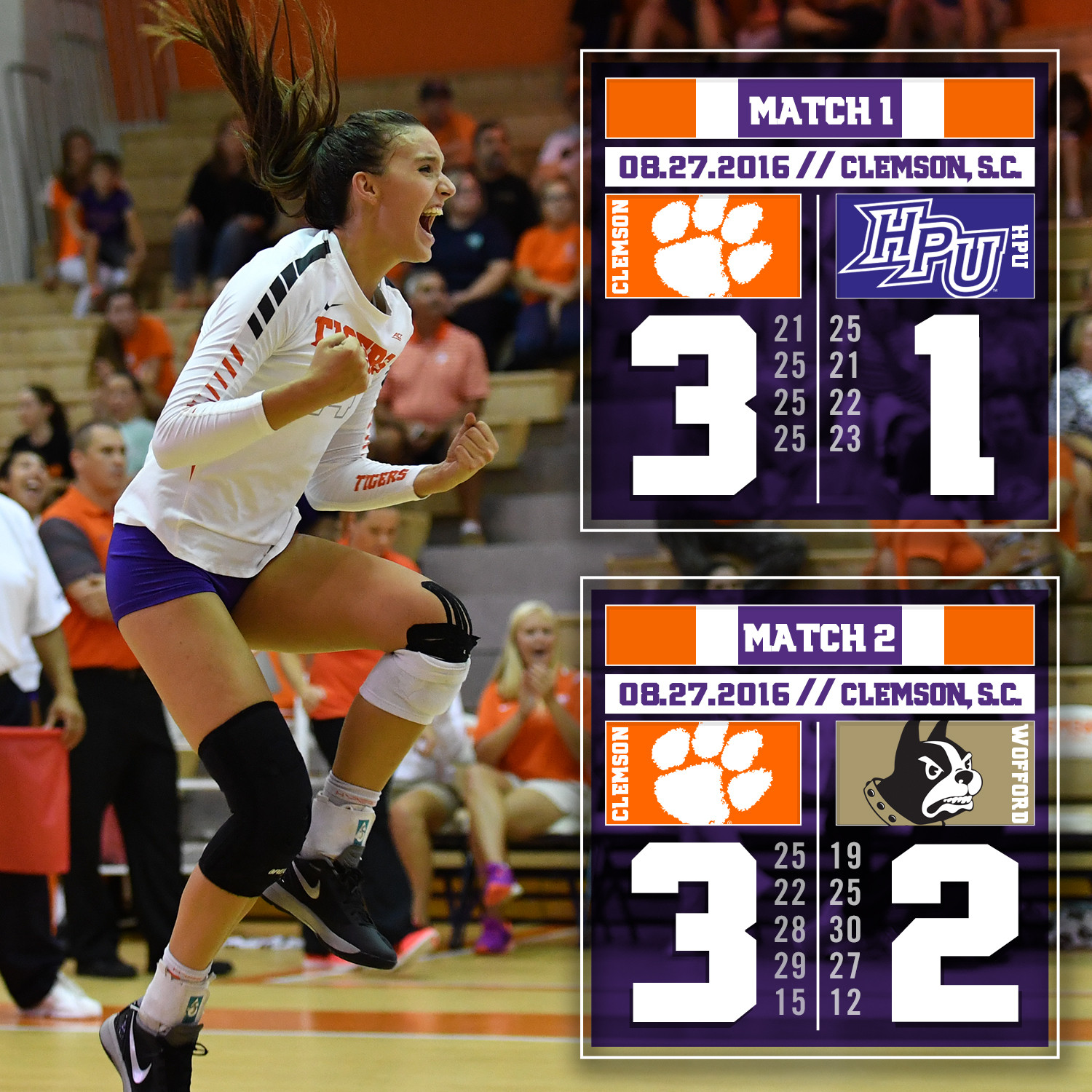 CLEMSON, S.C. – On the final day of the Big Orange Bash, Clemson (2-1) defeated High Point (2-1) and Wofford (1-2) to win the season opening tournament on its home court in Jervey Gym. Leah Perri, Kailey Harvell and Megan McGinley are the three All-Tournament selections with Perri being the MVP.

“Today was about playing in tight situations and managing them,” said head coach Hugh Hernesman. “I think the fourth set of the second match was a great example of us being able to execute with our backs against the wall, especially considering the fact that we were in unfamiliar lineup with Leah playing middle the last three sets.”

In the first match of the day, High Point took control early winning the first set 25-21, however the Tigers responded in the second to tie the match with a 25-21 score heading into intermission. Following the break, Clemson won consecutive sets, 25-22 and 25-23, to seal its first victory of 2016. Perri led the Tigers with 20 points and 18 kills, while Harvell was the only other Tiger with double-digit kills with 10.

Even though Perri and Harvell did the heavy lifting, it was the supporting cast that made the difference as Dejhana Cotton, McGinley and Annie Carter each had seven kills and a hitting percentage of .263 or better. Cotton led the group with a .500 hitting percentage to go along with six blocks. Keely Hayes fed the offense for 38 assists to go along with her efficient 5 kills on 10 swings with just one error. Defensively, Kennedy Wilson-Talmadge registered a career-best 19 digs in three sets of action at libero.

Heading into the final match of the night, Clemson needed to defeat Wofford in order to win the Big Orange Bash and in front of 1,112 fans, the Tigers did not disappoint. Clemson came out on top in a five-set thriller with the Terriers. After winning the first set 25-19, Wofford came back swinging to take the next two sets

Hayes dished out 66 assists, just three shy of the Clemson record book, to fuel four Tigers to double-digit kill matches. Perri led the group with 22 and McGinley threw down 16 kills with a .462 hitting percentage and eight total blocks. Harvell and Carter each had 15 kills with Harvell recording a double-double thanks to 13 digs. Wilson-Talmadge led the back row once again with her a career-best 22 digs.