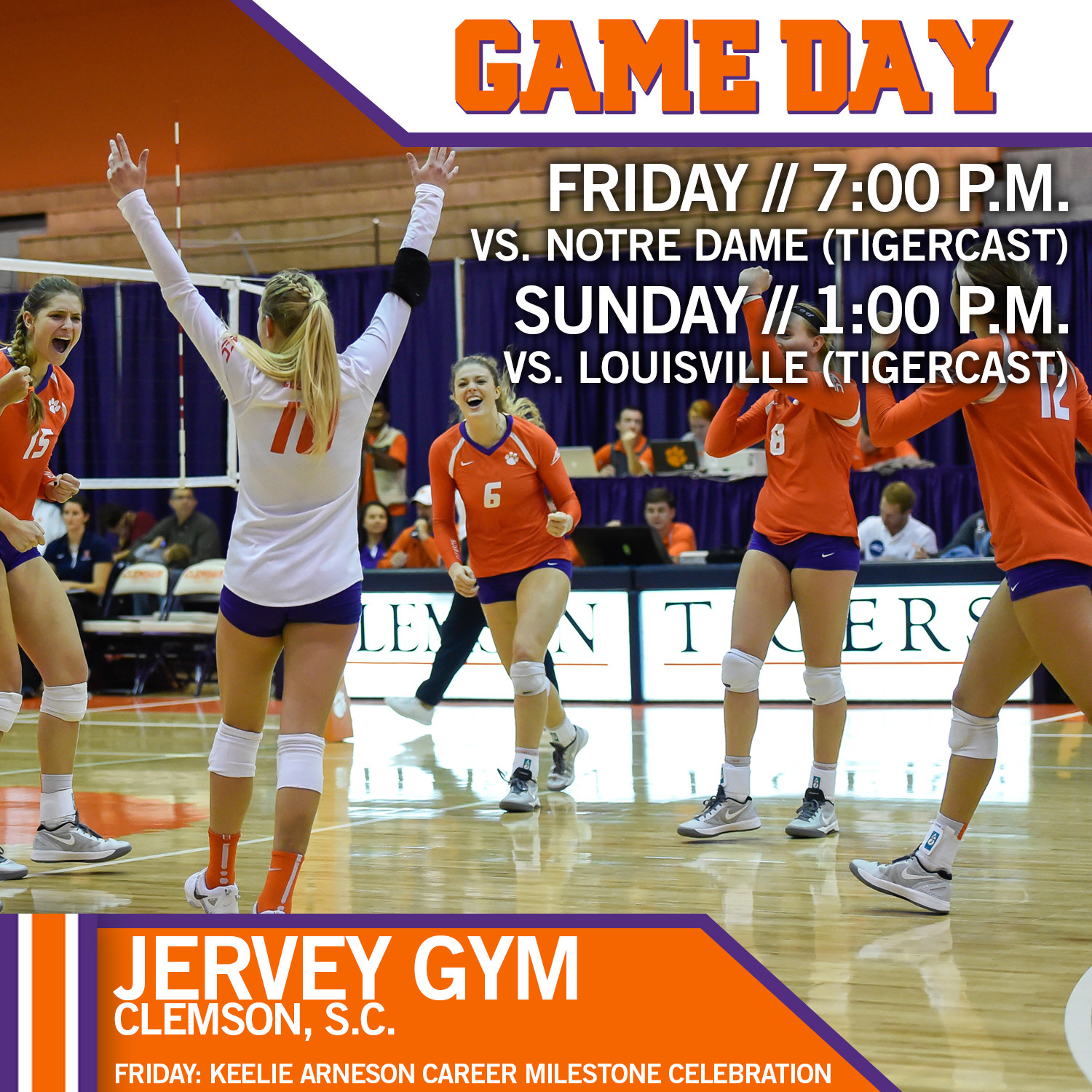 “Jim McLaughlin is one of the best in the business and they’re going through the same things we are, said head coach Hugh Hernesman. “They have new players, a new system, a new culture and it’s difficult to implement all of what’s new early on in the season.”

Clemson has the highest total of freshmen with eight newcomers this season but Notre Dame is the youngest team in the conference with 12 underclassmen and not one senior on the roster.

“I think it should be a good match. One of the best in the business is going to be here in our gym and it’s exciting to go against a team like that because you know they’re going to be very well coached and they’re going to play very good volleyball. They just went five sets with Syracuse who’s a real nice team as well so they can play.”

Like Hernesman, McLaughlin is beginning his first season with the Fighting Irish after 14 very successful seasons at Washington. McLaughlin has led his teams to the NCAA Tournament in 19 of his 25 seasons as a head coach, four of which came at Kansas State.

“They have a good program. I don’t think anyone needs to be confused by the records here. I think you see two programs that are still trying to figure some things out but I think we’ll some really good volleyball.”

Prior to watching two up-and-coming ACC programs square off on Friday night, fans will have the chance to witness a ceremony honoring Keelie Arneson on becoming one of the greatest NCAA Division-I volleyball student-athletes of all-time.

“Honestly it’s still kind of surreal to me. I knew Keelie when she was 16 years old and I don’t know if any of us involved would have thought that we would be talking about this. Last weekend was a great weekend for her individually but it wasn’t anything out of the ordinary. It was just Keelie being Keelie.”

Arneson’s 29 digs on the weekend places her 22nd all-time in NCAA history with 2,418 career digs. The total stands as the most among active D-I volleyball student-athletes. Her 5.22 digs per set average this season is the 15th best percentage in the nation and is the second best average among power five conference players.

“I’m very impressed with how she handled the build up to breaking into the top 25 because that kind of attention can get to some people mentally. She’s just so focused, she’s such a competitor and she wants this program to win and she wants this program to win this year. She wants to create another legacy. She created a legacy at Northwestern State and I think she wants to be a part of the creation of one here too. Keelie’s very driven, she’s very competitive and she’s motivated to make an impact here, with this team, this year.”

One thing Coach Hernesman often praises Arneson for is her ability to lead by example and show what athletes can achieve if they buy into the new style of training. One freshman who has responded well to the training is Kailey Harvell.

“It’s impressive to see what she’s done over the last couple of months here. She’s a totally different player. Something people may not know is because of her jumping ability, what happens a lot of the time is in high school and some club programs, someone like that ends up in the middle. She lined up in the middle a lot and this is kind of her first full go as an outside and to have the success she’s had in the ACC as a freshman, that’s impressive.“

Harvell is perhaps coming off the most impressive performance by a Tiger yet this season. Against Miami she imposed her will, killing 52% of the balls she was set, finishing with a .484 hitting percentage with 16 kills, one error and 31 swings. Exactly one-week prior, she went off for a career high 17 kills and five services aces complemented by eight digs against Syracuse.

Perri has been Clemson’s biggest offensive threat this season as she ranks sixth in the conference with 239.5 points this season, 209 of which were kills. The kill total as well as her 3.67 kills per set average rank her sixth in the ACC.

“Leah plays and she’s as dedicated as anybody that we’ve ever coached. She plays extremely hard. She’s a work horse, people know she’s getting the ball and she’s still competing so I think Kailey sees that and she’s motivated by that. Good competitors will see that and will say ‘Well, why can’t I do that too? I can do that.’”

Coach Hernesman is excited how the success and leadership of Arneson and Perri has made an impact on the freshman class. Now the freshmen have rallied together and are committed to taking this team as far as it can go by continuing to improve each day.

“I think this freshman class is very close, so they’re excited when they see their teammates and classmates do well. It just gives another level of confidence to what they can do and what they’re abilities are. You’re seeing Kennedy (Wilson-Talmadge) continue to arc, Sofia’s (Hruby) offensive game is continuing to grow, Megan’s (McGinley) blocking right now compared to where it was two weeks ago is better. It’s a motivated group and they all want to make an impact early in their careers.”

Notes (in 140 characters or less)    • Clemson’s eight freshmen is the highest total in the Atlantic Coast Conference.• Hugh Hernesman is the ninth head coach in Clemson volleyball history.• Clemson is currently fifth in the ACC, averaging 14.93 digs per set.• Clemson ranks eight in the ACC with 1.28 service aces per set.• Keelie Arneson’s 15 digs against #17 Florida State broke her into the NCAA’s list of all-time career dig leaders.• Keelie Arneson is the NCAA’s active career digs leader with 2,418 digs. The total ranks her 22nd all-time in NCAA history.• Keelie Arneson is the 36th Clemson student-athlete to be recognized as one of the NCAA’s career leaders in a statistical category.• If Keelie Arneson duplicates her ‘13 performance (712 digs) she will have the second most digs ever recorded in D-I women’s volleyball.• Keelie Arneson ranks 23rd in NCAA history with a career 5.29 digs per set average.• Keelie Arneson currently leads the ACC with 287 digs and a 5.22 digs per set average.• Keelie Arneson’s 5.22 digs per set average ranks her 15th in the nation and is the second best average in a power five conference.• Leah Perri headlines the Clemson attack with 209 kills in 2015 which is the sixth most in the ACC.• Leah Perri ranks sixth in the conference with a 3.67 kills per set average.• Leah Perri is sixth in the ACC with 239.5 points and is fifth with 4.20 points per set.• Leah Perri has double-digit kills in 13-of-15 matches this season.• Kate Federico ranks seventh in the conference averaging 8.93 assists per set.• Kate Federico ranks sixth in the conference with 509 assists.• Kate Federico has seven double-doubles this season and 10 matches with 30 assists or more.• Kate Federico’s 1,171 assists last year are the second most ever recorded by a Clemson freshman.• Kate Federico’s 1,171 assists in 2014 was the second highest total in the ACC and the most recorded by a freshman.• Kate Federico’s 1,171 assists are the most recorded by a Tiger in the last five years.• Kailey Harvell has recorded 10 or more kills in 11 of Clemson’s 15 matches this season.• Kailey Harvell is second on the team and not far behind Leah Perri with 181 kills and a 3.18 kills per set average.• Kailey Harvell did whatever she willed her last time out… Against Miami she hit .484 on the outside (16-1-31).• Kailey Harvell is credited with a career best 17 kills, and five aces to go along with eight digs against Syracuse.• Kailey Harvell is hitting .307 on Sundays with 33 kills, nine errors and 78 swings.• Kailey Harvell leads Clemson with 14 service aces.• Kennedy Wilson-Talmadge recorded her first career match with 10 digs or more, digging 16 balls against Syracuse.• Kennedy Wilson-Talmadge has 84 digs in 43 sets, which is the most digs of Clemson’s reserves.• Kennedy Wilson-Talmadge is 20 digs away from the third highest total on the team with eight fewer sets.