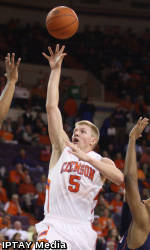 CLEMSON, SC – Just before Brad Brownell spoke to the media following Tuesday’s game against No. 22 Virginia, Paula Brownell asked her husband if he wanted to go to dinner to celebrate Valentine’s Day.

Valentine’s Day was not the only thing the Brownells were celebrating. They also celebrated the Tigers’ impressive second half performance, which led to their 60-48 victory at a sold out Littlejohn Coliseum. It was only the second time this season the Cavaliers lost by double digits, and the first time UVA had dropped two consecutive games.

“It was a great team win. I thought our guys really competed,” Brownell said. “When you play Virginia, they are so fundamentally sound and are in good position all the time, so your effort has to be supreme, and that was the case tonight – especially in the second half.

“I challenged our guys at halftime that we could not let this opportunity get away from us. We were in a position to beat this team tonight and we needed to take advantage of it. I thought our guys came out very spirited and played really well.”

With the game tied 24-24, Clemson turned up the tempo to start the final 20 minutes. Tanner Smith, who along with Andre Young led the Tigers with 13 points, drained a three-pointer, freshman Devin Coleman hit a jump shot and then Devin Booker followed with back-to-back power moves that gave Clemson a 33-30 lead with 16:30 to play. Clemson never trailed again.

The Tigers connected on 14 of 26 shots in the second half, while limiting Virginia’s possession and forcing bad shots at times. Clemson limited Virginia’s leading scorer Mike Scott to 13 points — four points below his season average — and held him scoreless for nearly 10 minutes during a key stretch.

Booker played a big role in limiting Scott’s touches as the 6-foot-8, 245-pound power forward used his bigger frame to body up and harass the Cavaliers’ top scorer in the second half.

“In the second half, I knew I had to limit his touches and limit his shot selections,” Booker said. “I think I did a pretty good job.”

Booker also did a pretty good job on the offensive end, as he finished the game with 10 points and four rebounds, all of which came in the second half.

“Devin needs to be able to do that, and certainly it was a big part of the game for us in the second half,” Brownell said. “His ability to score around the basket was big. I thought our guys got him the ball in pretty good positions.”

“Devin has been playing really well the last couple of games. He has a lot of confidence and we have confidence in him, so it was a matter of him going out there and doing it,” Young said.

The Tigers did it a number of ways Tuesday night. Clemson forced 18 turnovers, 14 of which were steals, and held Virginia to just 3-of-16 shooting from behind the arc. On the offensive end, the Tigers shot 46 percent, got 32 points in the paint and outscored the Cavaliers 17-2 off the bench. Coleman scored nine of those for a second straight game.

Brownell says it was a collective group effort on both ends of the court that got the job done. Clemson used 11 different players, especially early as Brownell tried to wear down a Virginia team that lacks depth and was limited even more with Joe Harris’ broken left hand.

Harris tried to give it a go, but he played only 21 minutes, while going 1-for-5 from the field for two points. Harris had 19 points for the Cavaliers in the Jan. 31 win over Clemson.

“I thought we did a good job offensively of making them play defense,” Brownell said. “We wanted to try and wear them down. They do not play as many guys as some people. Obviously Harris’ hand was bothering him some, so we felt like this was a game where we could wear them down a little bit.

“I thought on both ends of the court we needed to push them. I did not want to call very many timeouts tonight, even to stop the clock. I was going to play a lot of guys in the first half and I did, and I knew I would probably shorten the bench in the second half. I just wanted our guys to keep the pressure on, and I thought they did a really good job.”

Clemson will try to turn up the pressure even more this Saturday as it heads to Chapel Hill, NC for a 4:00 PM tipoff on ESPN against No. 8 North Carolina.