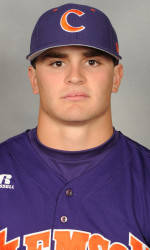 The Tigers held a 4-0 lead until N.C. State scored three runs in the top of the sixth inning before Clemson responded with a run in the bottom of the sixth. N.C. State scored three more runs on only one hit in the seventh inning to take a one-run lead before the Tigers tied the score with a run in the eighth inning. Both teams squandered scoring opportunities in extra innings before Brittle’s game-winning hit in the 12th inning gave Clemson its second one-run win of the season.

Anthony Tzamtzis (3-3), the last of four Wolfpack pitchers, suffered the loss. He yielded three hits, one run, and three walks with five strikeouts in 3.2 innings pitched.

Clemson took the game’s first lead in the first inning. Steve Wilkerson led off with a bloop single to right-center and advanced to third on Brittle’s single through the right side. Richie Shaffer bounced a single through the right side to score Wilkerson and up his hitting streak to 10 games, then Phil Pohl grounded into a 6-4-3 double play that allowed Brittle to score.

In the second inning, Jay Baum led off with a walk. Three batters later with two outs, Jason Stolz belted a double to left-center to score Baum.

Brittle led off the third inning with a single through the right side on a 1-2 pitch and scored on Shaffer’s double to left-center. Pohl followed with a single to right field on a 1-2 pitch to advance Shaffer to third. Two batters later, Baum drew a one-out walk on four pitches to load the bases, then Brad Felder struck out for out #2. Spencer Kieboom followed with a liner to right-center, but centerfielder Jake Fincher made a spectacular diving catch to save at least two runs and end the inning.

In the fifth inning, Shaffer led off with a walk. Two batters later, Jon McGibbon walked, then Baum reached on an error by third-baseman Trea Turner to load the bases with one out. However, Felder flied out to shallow left and Kieboom grounded out to end the inning, as the Tigers left the bases loaded for the second time in three innings.

The Wolfpack cut into the Tigers’ lead in the top of the sixth inning after Clemson was unable to add to its lead in the fifth inning. Turner led off with a single to center and Brett Austin walked. After Chris Diaz was hit-by-pitch to load the bases with no outs, Danny Canela laced a double to right field to score Turner and Austin. Pinch-hitter Tarran Senay then lofted a sacrifice fly to center to plate Diaz and cut Clemson’s lead to one run.

In the bottom of the sixth inning, Brittle hit a two-out single down the right-field line and Shaffer walked. Pohl followed with a double down the left-field line to score Brittle, but Shaffer was thrown out at the plate on a controversial call to end the inning.

Logan Ratledge was hit by a 1-2 pitch to lead off the seventh inning, then pinch-hitter Andrew Ciencin walked on six pitches. Turner reached on a bunt single and Ratledge scored on the play on an error by Pohl. The run ended Firth’s scoreless innings pitched streak at 23.0. After Turner stole second, Austin lofted a sacrifice fly to left-center to plate Ciencin and tie the score. Turner swiped third base, tying the ACC record with his fifth steal of the game, then Diaz lined an 0-2 pitch to center to plate Turner on the sacrifice fly, giving the Wolfpack a 6-5 lead.

In the eighth inning, Kieboom led off with a walk on six pitches and Slaton, a pinch-runner, stole second. Stolz’s groundout to second advanced Slaton to third base, then Wilkerson walked on five pitches. Brittle reached on a fielder’s choice as Slaton came home to tie the score and Wilkerson was retired at second base. Shaffer followed with a two-out single through the left side to move Brittle to third, but Pohl flied out to left-center to end the inning.

After the Wolfpack left the bases loaded in the top of the 10th inning, Slaton led off the bottom of the 10th inning with a hit-by-pitch, then Stolz reached on a bunt single. Wilkerson hit a grounder headed for centerfield, but Diaz made a diving stop and threw to second to retire Stolz as Slaton moved to third base. Brittle fouled out for out #2, then Shaffer was intentionally walked for the second time in the game. But Pohl struck out swinging to end the inning.

Ratledge was hit by a 1-2 pitch to lead off the 11th inning and advanced to second on Ciencin’s sacrifice bunt. After Turner walked, Austin flied out to center to move Ratledge to third. Diaz followed with a sharp liner, but Shaffer made the short-hop grab and threw to first for the inning-ending out.

Slaton led off the 12th inning with a walk on five pitches, then Slaton stole second on a failed hit-and-run swing by Stolz. Stolz struck out, then Wilkerson walked. After Brittle hit a liner just foul, one of four two-strike foul balls during the centerfielder’s plate appearance, he later blooped a 2-2 pitch to right field for a single. Slaton had to hold between second and third to make sure the ball would drop, but Head Coach Jack Leggett still sent Slaton towards home plate. The throw from shallow right field was in time, but Slaton slid around the tag and touched home plate just before the tag.

Brittle went 4-for-7 with two RBIs and three runs to lead Clemson, who outhit N.C. State 12-6. Shaffer went 3-for-3 with a double, two RBIs, and three walks. The junior third-baseman also extended his multi-game hitting streak to eight games. Pohl and Stolz both totaled two hits and an RBI. Slaton scored the tying and winning runs and added two steals off the bench as well.

Clemson and N.C. State will play game-two of the three-game series on Saturday at 12:00 PM. The game will be televised live by Regional Sports Network.