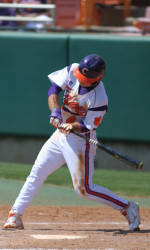 The Tigers scored two runs in the first inning and added a hit in the second inning, but they went hitless and scoreless during the next eight innings. In the top of the 11th inning, Daniel Aldrich smacked his third double of the game, this time to plate the go-ahead run with no outs. However, Daniel Gossett did not allow Aldrich to score, which proved pivotal.

Brad Felder hit a one-out single in the bottom of the 11th inning. Later in the frame with two outs and Felder on third, Brittle, who transferred to Clemson after playing two seasons (2009,10) with the Cougar program, lined a single to left field to tie the score and extend his hitting streak to 19 games. Later in the inning with the bases loaded, Wilkerson scored on a wild pitch to send the Tigers to a one-run victory.

Gossett (5-2), the last of four Tiger pitchers, earned the win. In 4.1 innings pitched, he allowed three hits, one run, and one walk with eight strikeouts. The four Clemson hurlers combined for 13 strikeouts against only two walks.

David Peterson (1-2) suffered the loss, as he gave up two runs on two hits in the 11th inning. Starter Christian Powell, Kyle Owings, and Peterson combined to allow only four hits, but they issued seven walks and hit five batters. They also combined to strand 12 Tigers on base, including seven in scoring position.

The Tigers grabbed the game’s first lead in the first inning. Brittle drew a one-out walk and Richie Shaffer walked on four pitches. After Phil Pohl loaded the bases with a hit-by-pitch and Jay Baum lined out, Jon McGibbon flared a two-out single down the right-field line to score Brittle and Shaffer.

In the second inning, Aldrich led off with a double down the right-field line on a 1-2 pitch and Rob Harding reached on a bunt single. Bradley Goodson followed with a single to right field on a 1-2 pitch to plate Aldrich.

Marty Gantt led off the sixth inning with a home run to left-center, his eighth long ball of the season, to tie the score.

Brandon Murray led off the top of the 11th inning with a bad-hop single through the right side on a 1-2 pitch, then Aldrich laced a double to right field to score Murray. Harding’s sacrifice bunt moved Aldrich to third base, but Gossett struck out the next two Cougars to keep Clemson behind by only one run.

In the bottom of the 11th inning, Felder blooped a one-out single to right-center, Clemson’s first hit since the second inning. Pinch-hitter Joe Costigan grounded out to short to advance Felder to second base. Felder swiped third without a throw and Wilkerson walked on four pitches. Brittle came through with a two-out single to left field on a 1-2 pitch to plate Felder and tie the score. After College of Charleston intentionally walked Shaffer to load the bases, Peterson threw a wild pitch with Pohl at the plate, allowing Wilkerson to score the winning run.

McGibbon had a game-high two RBIs to lead Clemson, who totaled just four hits in the game. Felder, another transfer from a Southern Conference team (The Citadel), went 1-for-3 with a run, two walks, and two stolen bases as well.

Aldrich went 3-for-4 with three doubles, an RBI, a run, and hit-by-pitch to pace the Cougars, who amassed nine hits.

Clemson and College of Charleston will play game-two of the three-game series on Sunday at 6:30 PM.