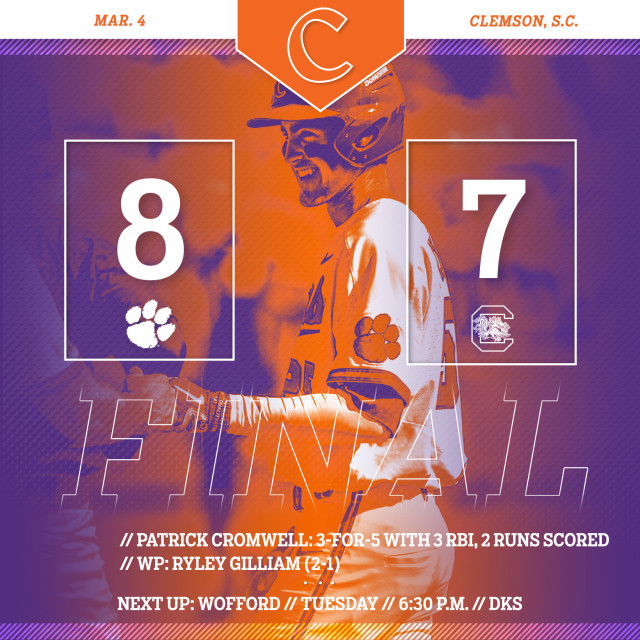 CLEMSON, S.C. – Drew Wharton hit a one-out triple that scored Robert Jolly in the ninth inning to lift No. 7 Clemson to an 8-7 walkoff victory over No. 23 South Carolina at Doug Kingsmore Stadium on Sunday afternoon. The Tigers, who won the series 2-1, improved to 10-1, while the Gamecocks dropped to 7-5. It marked the fourth series win in a row for Clemson over South Carolina.

Patrick Cromwell gave Clemson a 1-0 lead in the first inning with his second homer of the year, then the Tigers scored two runs in the third inning, highlighted by Chris Williams’ run-scoring single. In the fourth inning, Logan Davidson hit a run-scoring double and Cromwell added a two-run single. TJ Hopkins cut Clemson’s lead in half in the fifth inning with a three-run homer, then South Carolina scored a run in the top sixth inning. Davidson belted a solo homer, his first of the year, in the bottom of the sixth inning, then the Gamecocks manufactured another run in the eighth inning.

The Gamecocks took advantage of a costly Tiger error with no outs in the top of the ninth inning to score two unearned runs and tie the score 7-7. With one out in the bottom of the ninth inning, Jolly drew a walk, then Wharton belted a triple off the wall in right field. Jolly scored from first base to give Clemson its 10th win of the season.

Ryley Gilliam (2-1) did not allow an earned run in the final 1.2 innings pitched to earn the win, while Carman Mlodzinski (0-2) suffered the loss.

The Tigers host Wofford on Tuesday at 6:30 p.m., on ACC Network Extra. Tickets are only $2.