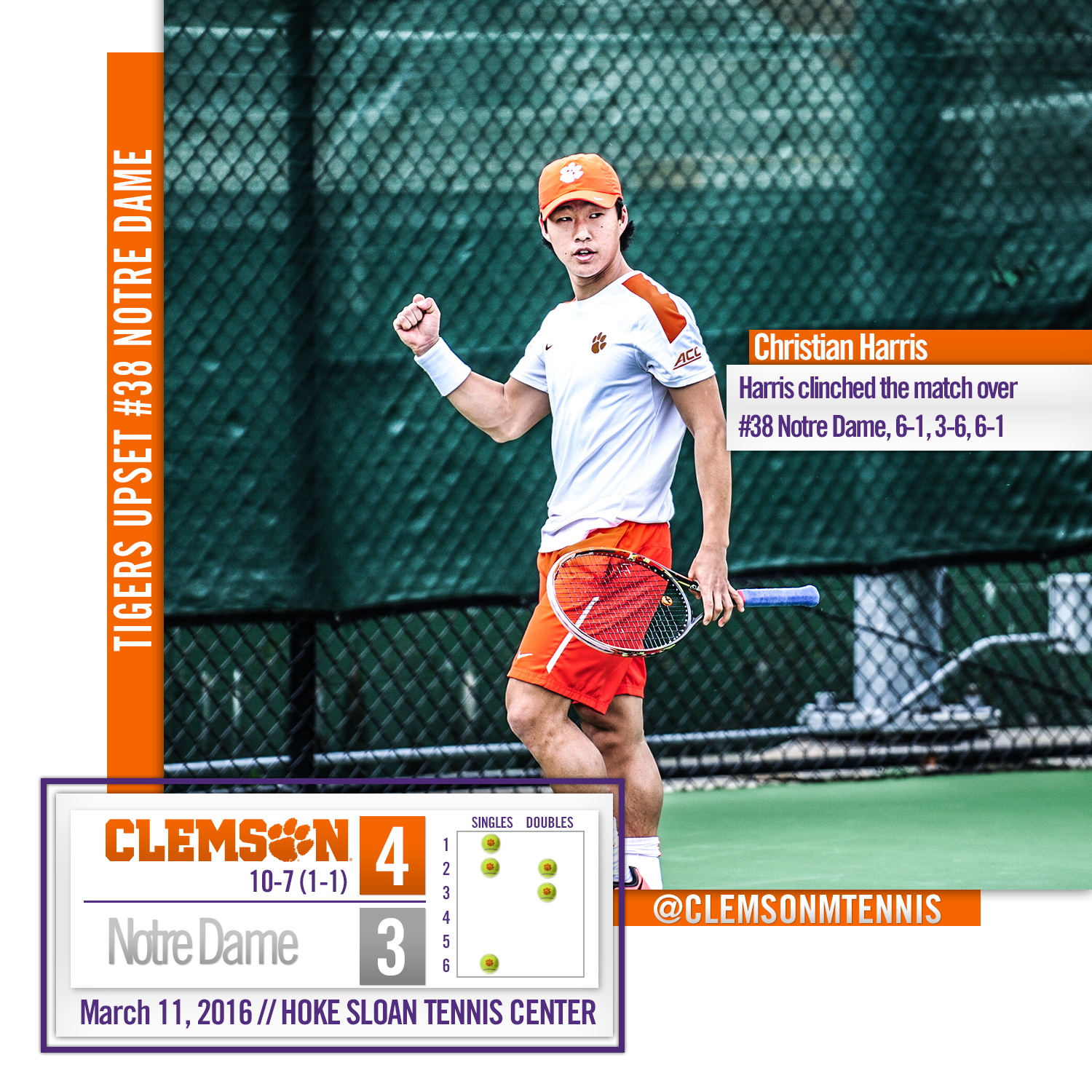 CLEMSON, S.C. – The Clemson men’s tennis team upset 38th-ranked Notre Dame on Friday morning at the Hoke Sloan Tennis Center by a score of 4-3. The match against the Irish was a thrilling one, with the final point coming down to junior Christian Harris, who won at No. 6 singles to clinch the team victory. The Tigers improve to 10-7 overall and 1-1 in the ACC with the win, while the Irish fall to 8-7 (2-1 ACC).

“We had to earn it today versus a tough, well-coached Notre Dame team,” said Associate Head Coach John Boetsch. “It was a solid team effort and we had been getting the same effort in training during the week. Robert Dudley made a huge comeback from 0-5 down to win the first set, and that played a major role in the momentum of the match. Christian, Luke and Alex showed great poise and confidence at the end of their singles matches. The guys competed hard for each other and the support from the fans and players was outstanding. The guys executed and showed strong belief down the stretch in doubles and singles.”

Clemson claimed a hard-fought doubles point over the Irish. Notre Dame started off with a win on court one, 6-3. Robert Dudley and Daffra Sanon were not far behind on court three, winning 6-3. The doubles point came down to Austin Ansari and Arturo Pinazo on court two. In a back-and-forth match, the duo pulled away, winning 6-4 and giving Clemson the crucial doubles point.

In singles play, the Tigers claimed the first two points from courts one and two. Alex Favrot, 6-2, 6-4, and Luke Johnson, 6-4, 6-3, both won in straight sets to give Clemson an early 3-0 lead. Notre Dame won the next two matches on courts three and four, bringing the overall score to 3-2 in favor of the Tigers. At No. 5 singles, Dudley trailed 0-5 in his first set before winning seven straight games to claim the set 7-5. While Dudley was battling in his second set, Harris was forced to a third set where he cruised to victory, clinching the match for the Tigers, 6-1, 3-6, 6-1.

Clemson returns to the courts on Sunday when the Tigers travel to Louisville for their first ACC road match. The Tigers take on the Cardinals at 1 p.m. For live scoring updates, follow http://sidearmstats.com/louisville/mten/xlive.htm. Periodic updates will also be available via Twitter, @ClemsonMTennis