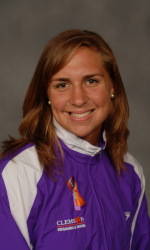 The afternoon started quickly for both Tiger teams, with the women jumping out with a win in the 200 medley relay, and the men’s group of Jay Crout, Andy Bergren, Adam Farnham, and Mark Vahle setting the pool record at 1:30.77.

Teammate Cassy LaRussa won the 1000 free and was runner-up in the 500 free. Freshman Meggie Mizelle won the 200 fly as well.

On the women’s side, The meet came down to the final two events, with the Tigers holding on to a three-point lead. Sophomore Summer O’Donnell, and Lauren Sindall won the event, but the next Tiger team finished fourth. In the end, the Seminoles won by one point.

It was the Tigers’ first one-point meet since November 3, 2001, a 122-121 win over Florida State. The one-point decision was the lowest margin of victory by any opponent in Clemson women’s swimming history.

The men saw many different contributors on the afternoon. Adam Farnham led the way with four wins, the 200 medley relay, 100 fly, 200 fly, and the 400 free relay. Senior Attila Ruszka won the 200 IM and the 100 breast. Jason Chatlosh took the 100 back in 51.03, with teammates Crout, Taylor Thompson, and Tom Recko right behind him. Recko would also go on to win the 200 back. Freshman David Gordon won the 500 free as well.

The men won their tenth meet of the season, making it only the third double-digit win season in Clemson history. Ip now has 49 overall men’s wins and 20 in ACC meets, moving him past Carl McHugh for second all-time.

The Tigers combined to win 21 of the 32 events, with the men winning 11 of those. For the men, it was their second win over the Seminoles this season. It was the fifth loss against a ranked opponent this season for the women.

The Tigers will return to action Friday at Gardner-Webb before closing out the regular season by honoring the seniors at home on Saturday Feb. 2 against Duke.