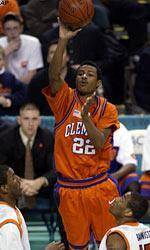 Virginia swept the season series, but the Cavaliers couldn’t keep the Tigers from outrebounding them for the third straight meeting. The Tigers had a 42-32 edge, including 14-6 on the offensive boards, and scored 15 second-chance points.

Virginia rallied late in regulation, erasing an eight-point deficit in the final three minutes to force overtime. Once there, Reynolds and Smith came through.

With his team trailing 71-69, Smith grabbed an offensive rebound of a miss by Brown. He passed to Reynolds, who knocked down the straightaway 3 to put the Cavaliers ahead to stay with 1:42 left.

On the next possession, Smith took a pass from Billet and hit a 3 from the left wing for a 75-71 lead with 57 seconds left.

The Tigers had a chance to tie it. After Smith’s free throw pushed the lead to 81-78 with 6.8 seconds left, Hamilton was sent to the line with 2.9 seconds to play. He made the first free throw and intentionally missed the second, but Reynolds came down with the rebound.

Reynolds added two free throws to seal it with 2.4 seconds left. He finished with 18 points.