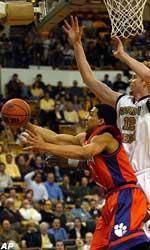 Shawan Robinson scored a career high 21 points and Sharrod Ford added a double-double, but it was not enough to counter B.J. Elder’s 36-point performance in Georgia Tech’s 76-69 victory over Clemson Tuesday night at Cremins Court at Alexander Coliseum.

Georgia Tech, ranked 14th in the nation in the AP poll, improved to 16-3 overall, 4-2 in the ACC and 10-0 at home. It was the closest any team has come to beating the Yellow Jackets at home this year. Clemson fell to 8-10 overall, 1-6 in the ACC. Clemson has played four of its last six ACC games on the road. The Tigers will play host to another top 20 team, 12th ranked North Carolina, on Saturday afternoon at 12:00 Noon.

Clemson shot just 35.5 percent from the field, 29 percent on three-point goals and committed 19 turnovers, yet gave the Yellow Jackets a 40-minute game. Clemson won the battle of the boards, 44-31, and forced 14 turnovers. The game was tied five times and there were four lead chances. Clemson outscored Georgia Tech 18-8 in terms of second chance points.

“We showed improvement from the Maryland game,” said Clemson head coach Oliver Purnell. “We played a pretty good first half against Maryland on Sunday, but tonight we played much better for the full game. We gave ourselves an opportunity to win on the road against a top 20 team. This is the third or fourth ACC game that has been the situation, we have only pulled one of them out (against Florida State).

“We battled the entire game and obviously made a very good basketball team struggle to win.”

Clemson held Tech point guards Jarrett Jack and Will Bynum to 3-15 shooting from the field and just 15 total points. Bynum had averaged 20 points per game over his last three games. Isma’il Muhammad, a double digit scorer this season, had just three points. Clemson was basically defeated by a one-man performance.

Elder eclipsed his previous career high of 25 points early in the second half and his 36 points were the most by a Tech player in 10 years. It was just one point off the Tech record for points scored in an ACC game, and it was the most points scored against Clemson since February of 2002 when Craig Dawson of Wake Forest scored 38 against the Tigers in a 118-115 Clemson double overtime victory.

“We allowed him to get on a roll,” said Purnell. “He is such a good player that once he gets on a roll he is very confident. He hit many big shots and when he went inside we had matchup problems. We played four different players on him over the course of the game. He was outstanding, obviously the best player on the court tonight.”

Robinson’s 21 points included a stretch of 11 consecutive points late in the game, his longest stretch of consecutive points since he has been at Clemson. He also added three rebounds and three assists in his 28 minutes as a starter. Ford’s performance included 19 points, and 13 rebounds, including a career high seven off the offensive boards. He also blocked two shots and made 9-11 free throws. Ford has now made 45 of his last 57 free throws over a 12-game period. It was his 10th career double-double, fifth this season.

Clemson withstood a torrid shooting first half by Tech. The Yellow Jackets made 15-26 from the field for 57.7 percent, including 5-9 on three-point shots. Elder had 20 of the 40 Tech points at intermission. Tech held a 40-34 lead at intermission. Clemson had nine points from Ford in the first half, while Robinson and Lamar Rice added six apiece. Clemson held a 21-17 lead in the first half after Robinson hit the first of his three three-point goals.

Clemson cut the lead to 40-38 to open the second half on a jumper by Christie. It was still a four-point game at 51-47 on a jumper by Olu Babalola with 12 minutes remaining. But, once again, Elder took the game into his own hands. He had a spurt where he scored 11 straight Tech points during the first half. He then trumped that with a 12-point spurt in a 3:49 time frame to bring Tech to a 65-51 lead with 6:44 left.

Clemson would not give up, however and cut the margin to 71-65 with 1:48 remaining on an old fashioned three-point play by Sharrod Ford. Clemson cut the lead to six points twice more down the stretch before the contest ended in a seven-point margin. Tech made six free throws inside the last 3:30 to ice the game.

Overall, Purnell was pleased with his team’s performance. “I thought we were mentally tougher and demonstrated winning behavior. We were positive and talking positively throughout the game. We have to build on that and use it as a stepping stone.”