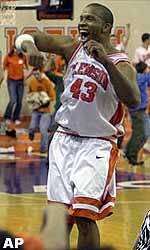 CLEMSON, S.C. (AP) – A floor burn on his left hand was the only thing that stopped Edward Scott on Wednesday night.

Scott had career-highs of 30 points and 16 assists to lead Clemson to a 118-115 double-overtime victory over No. 19 Wake Forest.

Craig Dawson hit three of his school record 11 3-pointers during that stretch, ending with a career-high 38 points.

“That was tough,” Scott said. “But I figured we had an extra five minutes to come back and make something happen.”

Clemson actually needed another 10. The turning point came with 1:20 left in the first overtime when Darius Songaila, who scored 24 points, fouled out with Wake Forest ahead 101-98.

With Songaila gone and Scott nursing his floor burn, the Tigers started pounding the ball inside, using a free throw by Chris Hobbs to cut the deficit to two.

Hobbs then tied the game at 101 on a layup with 55 seconds left, but he missed the foul shot that would have given the Tigers lead.

“I just didn’t want to be the goat,” said Hobbs, who had chances to win and lose this one.

He hit two free throws with 12.9 seconds left to seal the win, but called a time-out Clemson didn’t have with 14 seconds left, allowing the Demon Deacons to pull within one at 116-115.

Hobbs, who ended the game with 24 points and 17 rebounds, dominated the second overtime with frontcourt mate Ray Henderson. The pair combined for 13 of the Tigers’ 17 points in the second extra period.

The 233 combined points are one off the record for an ACC game set in December 1978 when Maryland beat North Carolina State 124-110.

Tony Stockman scored a career-high 30 points and tied his personal best with six assists for Clemson.

Clemson’s win snapped an eight-game losing streak that started when the Tigers lost to Wake Forest by 41 points on Jan. 12. In that game, Stockman and Scott were a combined 2-of-17. Wednesday night, they were 19-of-34.

Clemson shot 23-of-45 from the foul line, but missed four of eight foul shots in the final 41 seconds of regulation.

“We made it tough on ourselves by missing so many free throws,” Tigers coach Larry Shyatt said. “If there ever was a time for a group of young people to give in, this was it. But they did not.”