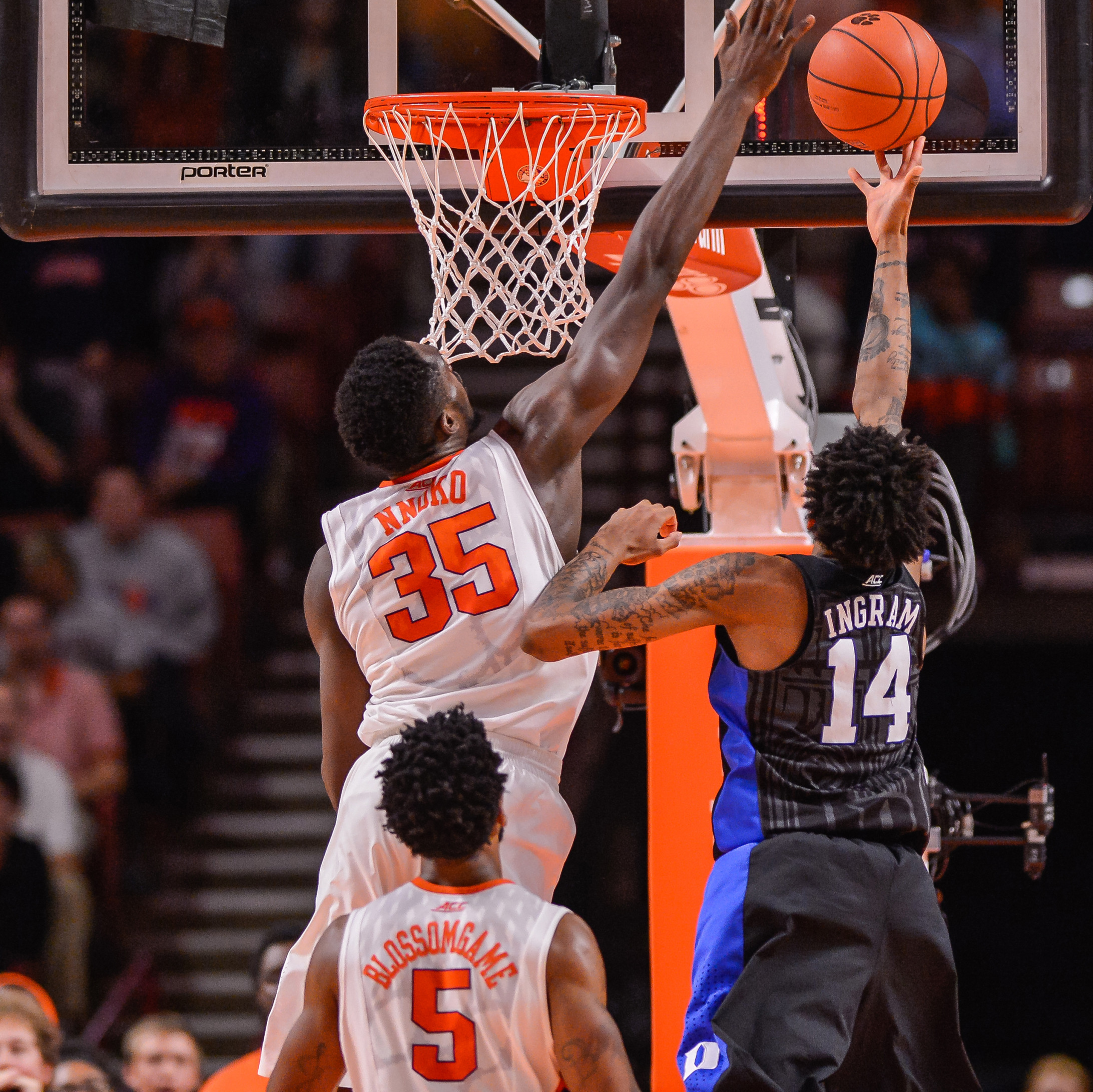 Tigers Tripped Up in Blacksburg

BLACKSBURG, Va. — Down by double digits in the second half, Clemson staged a last ditch comeback effort and actually led inside the final three minutes before falling 60-57 at Virginia Tech in Cassell Coliseum on Saturday. The loss dropped the Tigers to 14-9 on the season, 7-4 in the ACC. Virginia Tech improved to 13-11, 5-6 in league play.

Landry Nnoko had a monster effort despite the outcome, nearly producing a triple-double. The senior center finished with 17 points, 12 rebounds and a career-high eight blocked shots. His eight blocks were the most by a Clemson player against an ACC team since Trevor Booker against North Carolina in 2007.

Jordan Roper was 4-9 from three-point range and added 16 points, while playing all 40 minutes. Donte Grantham gave the Tigers three in double figures with 11 points. Jaron Blossomgame, Clemson’s leading scorer coming into the game, was held in check with eight points.

Clemson led for the entirety of the opening 20 minutes. The Tigers could never pull away, despite Tech’s inept shooting percentage (27.6 percent overall). Clemson’s largest lead was at seven points on 24-17 after Blossomgame’s second trifecta of the half. But the Hokies put back a miss and added a three-point play in the final seconds to pull within two at intermission.

Tech finally pulled ahead 28-26 on a layup by Seth Allen just over two minutes into the second frame, prompting a Clemson timeout. Roper hit a three and Nnoko continued to keep the Tigers close, but the Hokies put together a 6-0 run in the span of less than a minute capped by Jalen Hudson’s high-flying dunk. That put Tech on top, 41-32, with less than 12 to play.

Hudson then connected on a long three moments later to push the Hokies’ lead to double digits for the first time at 44-34. Grantham helped cut the lead to six, 48-42, behind a series of free throws. Roper’s third three-pointer of the game drew Clemson even closer at 50-47. The Tiger senior hit another long ball with 2:41 to give Clemson a momentary lead at 52-51, but the Hokies won the game by hitting their free throws down the stretch. Clemson missed six free throws, including a couple late that was costly in defeat.

The Tigers face a quick turnaround, welcoming Notre Dame to Bon Secours Wellness Arena on Monday. Clemson squares off with the Fighting Irish at 9 p.m. in a game televised by ESPNU. Tickets are available at ClemsonTigers.com.