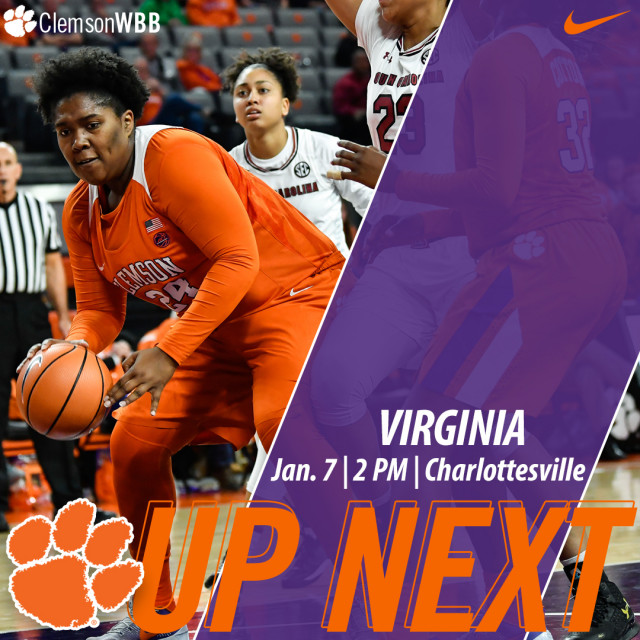 – The Tigers are 10-5 (0-2 ACC), most recently falling to No. 11/13 Florida State 69-47 on Jan. 4 at home at Littlejohn Coliseum. The Clemson defense played well against the Seminoles, holding them to their lowest point total of the season and 19.2 points below their season average. Seniors Alexis Carter and Ivy Atkism led the Tigers offensively, with Carter scoring a season-high 16 points and Atkism tying her career best with 12 points.

– Through 15 games and through games of Jan. 4, 2018, the Tigers are ranked first in the Atlantic Coast Conference and seventh in the nation in field goal percentage defense (33.5%) and second in the conference and seventh nationally in scoring defense (53.3%). In three-point field goal percentage defense (25.8%), the Clemson team is second in the ACC and 13th in the nation.

– Clemson Head Coach Audra Smith played for Virginia from 1988-92 under Debbie Ryan, during which time the Cavaliers went to three NCAA Final Fours and won two ACC Championships. Smith also served on the Virginia women’s basketball staff for 11 seasons, as a restricted earnings coach from 1994-96 and as an assistant coach from 1996-2004.

– Sunday’s game will also be a Homecoming for two other members of Smith’s staff, as Assistant Coach Tiffany Sardin played for the Cavaliers from 2002-06 and Director of Operations Kathy Becker played from 1998-2002.

– Edwards’ 43 steals put her at third among ACC players and 17th among all players nationally. Her steals per game figure is third in the conference and 34th in the nation.

– Thornton, an ACC All-Freshman Team selection last season, ranks third on the Clemson team in scoring (8.5 points per game) and leads the Tigers in rebounding (6.9 rebounds per game).

– Virginia leads the series between the two teams, with a 42-30 all-time advantage.

– Last season, the Cavaliers defeated the Tigers 69-37 on Jan. 19, 2017 in Littlejohn Coliseum. Jaia Alexander and Kobi Thornton had 11 and 10 points, respectively, in the contest to lead the Tigers.