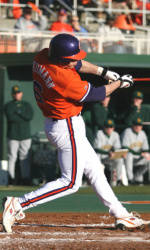 The Series Clemson and Central Florida have met five times on the diamond, with the Knights holding a 3-2 lead in the series. The two teams met in a three-game series at Doug Kingsmore Stadium in 2004, while they played neutral-site games in 1998 and 2000. Jack Leggett was the head coach of the Tigers in all five previous meetings.

The Knights won two of three games at Clemson from May 7-9, 2004 by a combined score of 15-14. On January 30, 2000, Central Florida downed the Tigers 5-0 at Lake Buena Vista, FL after the Tigers defeated Central Florida 7-6 on February 7, 1998 in Kissimmee, FL. Clemson has never faced the Knights on their home field. No current Tiger has ever played against Central Florida as well.

The Starting Pitchers In game-one, Central Florida will send out junior righthander Kyle Sweat (5-3, 4.90 ERA) on the mound. The Apopka, FL native has made 11 starts and one relief appearance for a total of 60.2 innings pitched. He has allowed 84 hits (.337 opponents’ batting average) and 15 walks with 50 strikeouts this season.

The Tigers will counter with junior righthander D.J. Mitchell (5-4, 3.26 ERA) on Thursday. The Rural Hall, NC native has made 12 starts and six relief appearances for a total of 85.2 innings pitched. He has yielded 84 hits (.259 opponents’ batting average) and 35 walks with 86 strikeouts.

In game-two, the Knights will send out junior lefthander Mitch Herold (4-3, 2.98 ERA) on the mound. The Merritt Island, FL native has made 11 starts and one relief appearance for a total of 63.1 innings pitched. He has yielded 55 hits (.235 opponents’ batting average) and 25 walks with 61 strikeouts. He has also allowed just six extra-base hits.

Clemson will counter with freshman righty Graham Stoneburner (5-4, 4.98 ERA) on Friday. The Richmond, VA native has made 12 starts and two relief appearances for a total of 65.0 innings pitched. He has allowed 68 hits (.271 opponents’ batting average) and 18 walks with 47 strikeouts.

In game-three, Central Florida will start sophomore lefty Mitch Houck (4-3, 7.10 ERA) on the mound. The Weston, FL native has made 11 starts and one relief appearance for a total of 52.0 innings pitched. He has given up 57 hits (.277 opponents’ batting average) and 35 walks with 69 strikeouts.

The Tigers will counter with junior righthander Trey Delk (2-1, 3.78 ERA) on Saturday. The Elgin, SC native has made three starts and nine relief appearances for a total of 33.1 innings pitched. He has allowed 33 hits (.256 opponents’ batting average) and 14 walks with 30 strikeouts.

The Knights Central Florida, led by Interim Head Coach Craig Cozart, enters the series against Clemson with a 31-22 overall record and 8-16 Conference USA mark after defeating UAB twice in three games at home last weekend. The Knights, who have a 26-9 home record, won 19 of their first 20 games this season.

The Knights are averaging 7.2 runs per game and hitting .310 with a .399 on-base percentage. The team has totaled 100 doubles, 14 triples, and 38 home runs. Central Florida has also stolen 96 bases in 116 attempts, including five Knights with at least 10 steals.

The pitching staff has a 5.46 ERA and .288 opponents’ batting average along with 502 strikeouts against 207 walks in 468.0 innings pitched. Central Florida is among the national leaders with 9.7 strikeouts per nine innings pitched.

Junior righthander Justin Weiss has a 2-1 record and 3.27 ERA in 20 relief appearances. He also has seven saves and has not allowed a home run in 33.0 innings pitched this season. The Knights are fielding at a .971 clip as well, as no position player has committed more than six errors in 2008.

The Tigers Clemson enters the series at Central Florida with a 27-25-1 overall record and 11-18-1 ACC mark after defeating College of Charleston 12-6 at home on Tuesday night. The Tigers are also coming off two losses in three games at #25 Georgia Tech over the weekend. Clemson has a 7-12-1 record on opponents’ home fields as well.

The pitching staff has a 4.78 ERA and .287 opponents’ batting average. Righthander Matt Vaughn has struck out 39 against 12 walks in 36.2 innings pitched and has nine saves in 27 appearances. The Tigers are fielding at a .965 clip as well.

Tigers Up For One of Two ACC Tourney Slots The Tigers, who finished with an 11-18-1 (.383) ACC regular-season record, currently stand in eight place in the ACC standings, ahead of ninth-place Duke (8-17-1 ACC record). Duke must win three games at Virginia Tech this weekend to earn a spot in the ACC Tournament and potentially knock Clemson out of the tourney. If Duke sweeps the Hokies in three games, then Wake Forest (11-15 ACC record) must go 0-3 at Boston College this weekend for the Tigers to make the ACC Tournament.

The top-eight teams in the league standings will play in the 2008 ACC Tournament at Jacksonville, FL from May 21-25. Boston College, Maryland, and Virginia Tech have been eliminated from appearing in the ACC Tournament.

The oddities in the race are due in part to the weather. Clemson and Duke played to a 6-6 tie in 10 innings in Durham on April 20 due to unplayable field conditions after rain came through the area. The Tigers had taken an 8-6 lead in the 11th inning, but those two runs did not count, resulting in a rare tie.

Both Duke and Wake Forest have also missed out on a game due in part to inclement weather. On Sunday, March 23, #5 Miami (FL) was leading Wake Forest 9-1 in Coral Gables, FL in the bottom of the fourth inning in game-three of the series. But inclement weather helped force the game to be cancelled.

One week later, Duke led #3 Miami (FL) 1-0 in the bottom of the first inning in game-three of the series at Durham, NC. However, inclement weather helped force the game to be cancelled as well. Both Duke and Wake Forest went 0-2 against the Hurricanes, while the Tigers had an 0-3 record against Miami.

Tigers #28 in Unofficial RPI Through games of May 13, Clemson has an unofficial RPI of #28 according to WarrenNolan.com. The Tigers have also played the nation’s toughest schedule according to the same website. Of Clemson’s 53 games, 45 have been against teams in the top 94 of the RPI. Clemson is also 8-0 against against teams with an RPI higher than #94. There are 297 schools that play Division I baseball.

Tigers Tame Cougars 12-6 Clemson scored seven runs in the second inning on its way to a 12-6 win over College of Charleston at Doug Kingsmore Stadium on May 13. Jeff Schaus hit his first career homer, a two-run shot, in the first inning, then Stan Widmann hightlighted Clemson’s second inning with a three-run homer. Widmann added his second homer, a two-run long ball, of the game and season in the seventh inning, as he totaled five RBIs in the contest. Casey Harman pitched 2.0 scoreless innings in relief with three strikeouts to earn his first career win. Both teams used seven pitchers apiece, while the teams combined to play 43 players in the game.